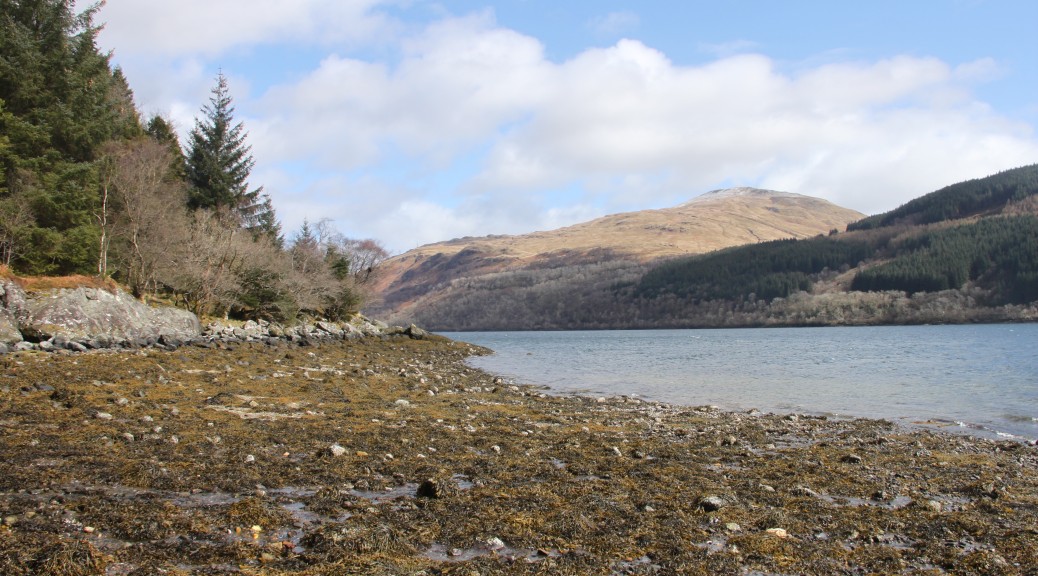 This is a favourite walk especially since the awkward detours around the construction of the new Ardgartan Hotel have been smoothed out, and routes are now signposted, improved underfoot, bridged and keep walkers away from the hotel. The outward and return paths, straight out of, and back to the car park, now run prettily beside a burbling burn, through beech and birch woods and then take you down to Loch Long with spectacular views up to Arrochar and across to the Glens of Douglas and Luss and the back of Beinn Tharsuinn and the not-quite-so attractive views down to Faslane. Back on to the tarmac road (which could be used to Coilessan car-park to shorten the walk) there are wonderful views, now from a higher vantage point, and the burn itself is magnificent. As a reward for the climb you immediately wend your way back down to the lochside and a lovely track beside the water ending at Guanan – a good spot for lunch. Unfortunately, what goes down must come back up but you’re soon at yet another waterfall and a more-or-less flat track – now pompously re-named ‘The Duke’s Road’ with spanking new sign-posts at every junction. Then it’s back to Coilessan, down the road, and a short cut through the woods to the cars. About nine miles of woods, rivers, lochs and mountains!

Park at the Ardgartan car-park in Glen Croe. The satnav for the Ardgartan Hotel is G83 7AR which would take you to your car park. The Visitors Centre is now closed but in its stead are toilets which are preferable!!

To get there, take the usual route out on the A82 which goes by varying names along Great Western Road, the Boulevard, through Milton to Dumbarton where it becomes a dual carriageway and enters the National Park at Balloch at the ‘new’ roundabout with flying birds. Keep straight on up Loch Lomondside (don’t go into Balloch) to Tarbet. Here take the A83 which goes straight on (the A82 goes right to Crianlarich) and then swings left to Arrochar, At Arrochar turn right and go around the head of Loch Long. Follow the road as it turns sharp right to go up through Glen Croe, usually known as ‘The Rest and be Thankful’. However, just as you turn right with the road you’ll pass a sign for Ardgartan Caravan Club/site and about 250 metres further on a very upmarket place for cyclists to cross. Start signalling here for just past this you turn left into the Ardgarten car park.

Your walk begins by taking the lovely little path along the Croe Water which begins with a three-ringed (red, blue and yellow) post at the far end of the car-park by the Information Board. This very well-made path twists and turns among deciduous trees beside the burn but you soon lose the yellow markers which go off to Succoth. At the junction, with a sturdy wooden bridge on the right, resolutely ignore this and turn a dog-leg, left-right along a continuation of the path still following red and blue markers. You’re taken round the bend in the Croe water to a sturdy bridge across and then down the other side. Miraculously, you avoid the Hotel and go straight on, with blue markers only, on the original public footpath to the lochside. The views here up to Arrochar, down Loch Long and across to the West Highland Line and Ben Lomond above are wonderful. Behind you is The Brack and to the left the ‘castle’ part of the Cobbler. The path continues round the bay and then climbs up to a LRT.

The next bit is something of a pull, and being through the forest, less attractive. However, it suddenly opens out by the Coilessan Burn where the forest has been cleared so there are views all around once more. (The ‘new’ Cowal Way joins your LRT.)

Take the track on your left, just past the impressive Coilessan Burn. This wanders and turns down to the loch side at Dial. (These hamlets are worth pondering – what on earth did the inhabitants eat?) Continue along by the shore for just under a mile to Guanan (a ruined but ‘n ben).

It is then something of a pull winding up to the Duke’s Road (named after the Duke of Argyll ?) and a more-or-less flat track, parallel with loch below but about 400 feet up for about a mile and a half. One advantage of forest clearance is that the views are again lovely, a welcome break from the forest tracks.

From Coilessan it’s downhill all the way. On the way back, look out for the brown-painted wooden double barrier on the right-hand-side of the LRT and the path down to the loch edge. You’ll recognise all this from the journey out. You come back, this time ignoring all diversions, to the sturdy bridge. Once across the bridge, follow the right-hand riverbank back to the cars. You might want to do just the twirly bits again one day before having a bacon butty at the Caravan Park café!

One thought on “Ardgartan to Loch Long”