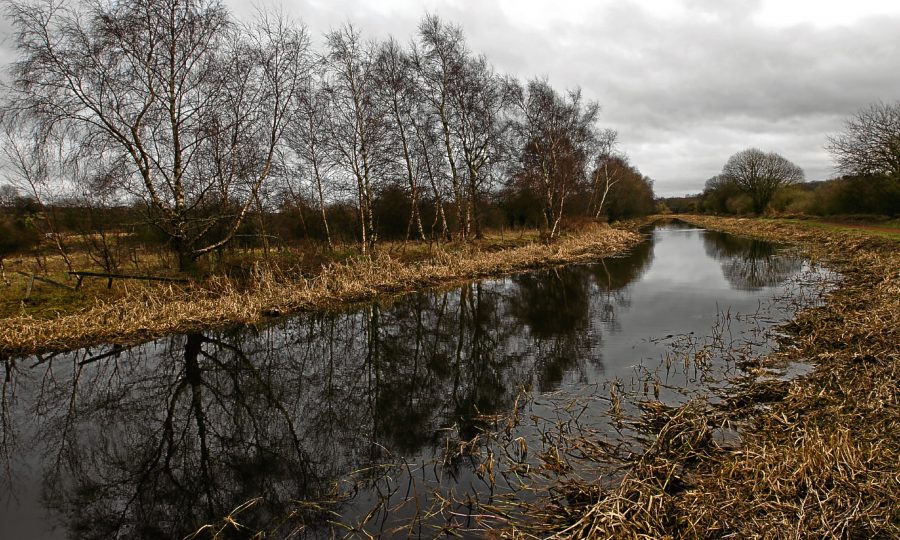 Coatbridge, was once one of the Scotland’s largest cities. It has six railway stations! The walk starts at Summerlee -The Museum of Scottish Industrial Life – and goes from there down to the canal basin. This area was once known as the muttonhole. It is unique in that the Gartsherrie Burn passes under the Monkland Canal. The canal is crossed by a road bridge which is then spanned by a rail bridge – possibly the world’s first ‘spaghetti’ junction!

From the muttonhole your walk, of just over 8 miles, takes you west along the Monkland Canal and into Drumpellier Country Park. After enjoying a circuit of Lochend Loch you return via Garnheath Wood to our starting point.

The starting point is at OS Reference NS 728 653 which is the car park opposite Summerlee Heritage Park, Coatbridge.

Getting there:  12 miles/25 minutes
Take your favourite route out of Glasgow to join the M8 towards Edinburgh.  Exit at Junction 8 onto A89 (Coatbridge). Follow the road until you are in Bank Street and at the roundabout (with the Time Capsule Leisure Centre diagonally opposite on the right) turn left.  After 50m take the first right into West Canal Street.  Go under the railway bridge at Coatbridge Central station and then turn left into Heritage Way.  Parking is on the left opposite Summerlee Heritage Park and is free.

The Walk:  Monkland Canal/Drumpellier Country Park – 8.0 miles (It can be shortened if required)
You may wish to start the day with a visit to the Summerlee Museum of Scottish Industrial Life (entry is free).  There is an exhibition hall, various outside attractions including Scotland’s only electric tram (charge applies), a replica of the first iron boat – Vulcan, and a recreated mine and miners’ cottages (a small charge applies for a 15 minute tour).  There is a café.

The walk itself starts from within the Heritage Park, after visiting the museum/café, and exits at the dry part of the Monkland Canal where the canal goes over the Gartsherrie Burn, the road goes over the canal and the railway goes over the road!  Turn right and follow the course of the canal under Blairhill Street and continue until Blair Bridge.  Pass under the bridge and turn immediately left, and at the road turn right.  Turn right into Drumpellier Avenue, left into Golfview Drive then left into an access drive opposite Davaar Drive.  Follow this slightly downhill and continue right on the access drive.  As you come to the last house turn left over a low stone ‘wall’ onto the golf course.  Turn right and follow the boundary of the golf course. At the bottom corner continue left hugging the boundary.  Opposite a clump of trees on the left take a short flattish path through the tree line (on the right) and turn left onto the canal towpath.  At the end of the towpath there is a choice (1) of returning along the towpath until a bridge on the left (opposite Drumpellier Home Farm).  Cross the bridge and bear left.  Continue until a bridge on the right (over the railway).  Or (2), cross the decking over the canal and follow the wide track (which may be wet and muddy) back to the railway bridge.

If you want a shorter walk cross the railway bridge into Drumpellier Country Park and turn left.  Follow the wide track down to the corner and turn right.  Follow the track until it joins a road just before the nursery and bungalow and continue onwards to Lochend Loch.  Take the path to the left around the loch and follow it to the visitor centre.

For the full walk cross the railway bridge and turn immediately left onto a path that hugs the railway line.  At the corner where a sign post indicates to go right continue forward onto a grassy path which eventually curves round to the right and passes a small lochan/pond on the right.  Follow the path into the woodland and bear left where there is an obvious choice.  Pass through a fence line and follow the path slightly downhill and cross the burn onto a good solid path.  Turn left and bear immediately right and follow this straight path to Lochend Loch.  Then take the path to the left; continue to the visitor centre.

Take the path to the east of the loch and at the southern end turn off left past the Peace Garden.  Turn right before the bungalow and follow the path past the nursery into the raised bog area.  Near a junction of paths turn left uphill through a large wooden access point.  After cresting the rise the path turns left downhill.  Ignore the path on the right and continue on until it meets the road slightly south of the bungalow.  Turn right and shortly afterwards bear right. This leads back to the railway bridge.  Cross it, turn left and after a short distance bear right (signed Coatbridge).  After crossing the canal bridge turn left and follow the towpath back to Blair Bridge and then back to your car.