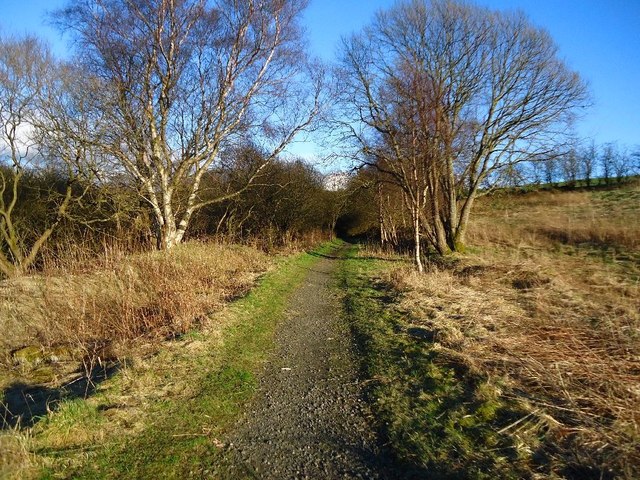 This walk this month – with the possibility of a pre-walk cuppa at the Summerlee Museum of Scottish Industrial Life, starts off with a short walk to Coatbridge Sunnyside Station to catch the train eastwards.

The canal meanders its way past Calderbank and Sikeside then through Coatbridge before passing close to Coatbridge Central Station and back to the museum, the cars and some food.

Alighting at Drumgelloch Station the route follows some surface streets before picking up the North Calder Heritage Trail.  This trail passes Moffat Mills and then joins the Monkland canal, which was started in 1770.

The meeting point is at OS Reference NS 728 653 which is the car park opposite Summerlee Heritage Park, Coatbridge (see map >).

Take your favourite route out of Glasgow to join the M8 towards Edinburgh.  Exit at Junction 8 onto A89 (Coatbridge). Follow road until you are in Bank Street and at the roundabout (with the Time Capsule Leisure Centre diagonally opposite on the right) turn left.  After 50m take first right into West Canal Street.  Go under the railway bridge at Coatbridge Central station and turn left into Heritage Way.  Parking is on the left opposite Summerlee Heritage Park.  Parking is free.

Getting there: 12 miles/25 minutes

The day starts with a visit to the Summerlee Museum of Scottish Industrial Life (entry is free).  There is an exhibition hall, various outside attractions including Scotland’s only electric tram (charge applies), a replica of the first iron boat – Vulcan, and a recreated mine and miners’ cottages (a small charge applies for a 15 minute tour). There is a café.

After a cuppa leave the museum grounds and walk down Heritage Way, turn left under the railway bridge and at the roundabout turn left up Sunnyside Road. Cross the road at the bend opposite Sunnyside Station, purchase your ticket to Drumgelloch, then go over the road bridge to the platform for eastbound trains.

At Drumgelloch exit the station to the right and follow the boundary path/fence to the northeast corner and go right into Katherine Street.  Walk to the end and turn right (Towers Road), cross the railway bridge and turn left into Wester Moffat (Forestry Commission woodland). Take the left path and keep the railway on the left.  At the road, which is fenced off, follow the path for a short climb.  Keep left at the brow and as the path descends look out for the path to the right with the NCHT trail logo.  Descend the path to join the North Calder Water.  At Moffat Mills the path exits briefly into an estate.  Turn left and then left again, cross the bridge and after 50m cross the road to rejoin the NCHT.  Those wanting a much shorter walk (2.5 miles) can turn right and follow the road back to Drumgelloch Station.

Despite being so close to civilisation the NCHT has a country feel although it occasionally surfaces to skirt housing areas (e.g. Islay) before returning to the ‘wild’. The next road to cross is the A73 at Monkland Bridge.  Cross the main road into Woodvale Avenue, ignore first left and shortly thereafter turn left down the side of a house.  Cross the river and turn right.  Follow the path as it gently rises and at an obvious fork go right. Turn right again at another path junction.  At a crossroads of paths go right down the steps but do not cross the river. Continue on the broad path which comes out in an open space, ignore the path to the right and continue on.  The water will now be on the left!  At the next main road (B802) turn left, cross the road, and go right along a unmade road with houses on the right.  This leads to a dam and the end of the Monkland Canal.  Follow the path all the way to Sikeside and cross a busy minor road.  The path continues straight ahead and skirts a school. At the old railway viaduct turn left for a short ascent to the cycle path.  Turn left for 50m and then right and go down to another road.  Turn left, ignore the roadway on the left, and after 50m turn left to follow a broad path into a grassed area with warehouses on the right.  Follow this until the A725 and take the walkway over the busy road and exit to the right and then turn left to join an obvious path which passes buildings on the left.  At the minor road cross it and continue past the health centre.  As the pathway bends right to join a walkway over the main road turn off left and at the street turn left.  Then turn right at the end of the street.  With the railway high above on the left go to the end of the road, cross under the railway bridge, and then cross Bank Street and West Canal Street.  Turn right into Heritage Way to retrace the route back to the car park opposite the museum.