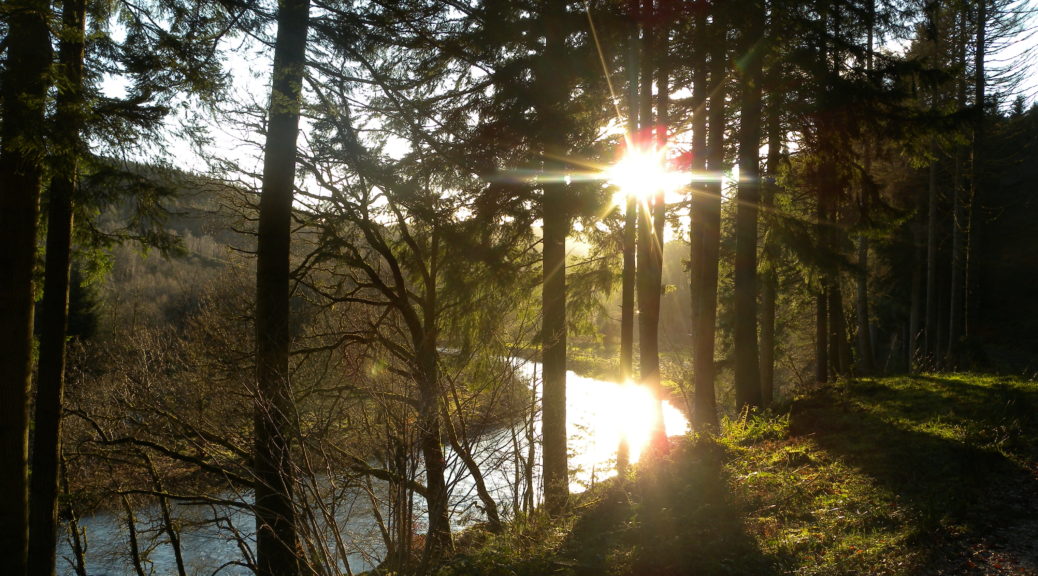 This walk in Loch Lomond and Trossachs National Park near Aberfoyle will take in the beauty of this part of Scotland.

Aberfoyle is a gateway to the Trossachs and is well known for Rev Robert Kirk and his book “The Secret Commonwealth of Elves, Fauns, and Fairies”.  This book was written in 1681 but not published until much later, 1861. Perhaps he should be equally remembered for an early translation of the Psalter in Gaelic (1684).

The plan is to exploresome of the forest trails to the south of the town.  Aberfoyle has plentiful parking and it is from here that the walk will start.  Public toilets are available near the main car park.

The starting point is at OS Reference NN 520 009 which is the car park behind the Forth Inn at Aberfoyle.

Getting there: 25 miles/50 minutes

Take your favourite route out of Glasgow towards Strathblane on the A81 (or towards Carbeth on the A809 and turn right onto the B834 and then left to join the A81 towards Aberfoyle).  At the Rob Roy Hotel by the roundabout on the outskirts of Aberfoyle turn left (A821) and in the town centre turn left at the sign Parking/Scottish Wool Centre.  Parking is free and there are toilets.

The route starts by leaving the car park by the west exit.  Turn left into Manse Road and cross the River Forth onto the Rob Roy Way. Pass Aberfoyle Old Church and Burial Ground on the left, then ignore the road on the left and continue onwards. Bare right where the road splits ignoring the track on the left signed Downhill Fairy Trailand enter Loch Ard Forest.  Continue on and ignore the path on the right.  After a further 100m turn right off the Rob Roy Way.

2For the 4.5 mile route turn right towards Milton and pick up the route in the next paragraph. For the full walk turn left from the Car Park and head south west, passing Dalzell Wood on the right, and intermittently parallel the Duchray Water.  Ignoring the tracks going off to the left continue on the forest track as it gently climbs to Lochan a’ Ghleannain.  There is a scenic area at the east end of the lochan.

3For the 7.5 mile route turn right, away from the Lochan a’ Ghleannain, and return to the Forest Car Park and then on to Milton for the last leg of the route (see below).  For the full route, continue anticlockwise around the lochan, ignoring the tracks going off to the right.  Once past Creag Bhreac ignore the track on the left, then at the next junction turn right and shortly afterwards turn left.  As the track approaches Loch Ard turn right and follow this track, often close to the shore, back to Milton.  2,3At the hamlet of Milton turn right onto B829 (Aberfoyle) for the final level footpath that leads back to the starting point.