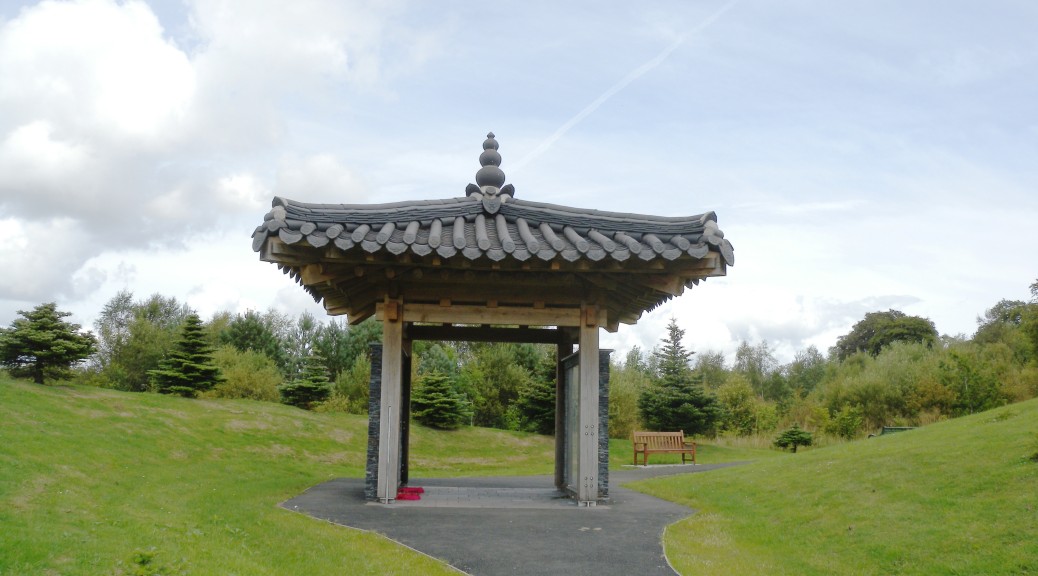 Beecraigs Country Park, full of picturesque surprises, is new territory for most Glaswegians.  The views from even quite small lumps are spectacular – mainly because of the clarity of the air and the positioning of the lumps (especially Cockleroy) with little around them to block the views. You can see as far as Arran and, of course, the Forth Bridges (nearly three of them) and Linlithgow lying below us. At first it seems rather douce for experienced walkers, what with surfaced paths, signposts, foot bridges and viewing platforms, to say nothing of a children’s adventure play area and an ice-cream van. But within 25 minutes you are wandering down attractive, less-peopled paths. It is making a detour through Witchcraig Wood to the only War Memorial in the UK which commemorates those killed in the Korean War (1950-1953) – a sobering number and mainly Scots. If you go  up to the top of the hill behind passing the Refuge Stone get tremendous views while the flat-earth-brigade can reach the memorials along the road.

Make sure you park at the Visitors’ Centre and not Balvournie or you’ll be lost before you start. The Visitors’ Centre is off-centre to the north whereas Balvournie is right in the middle so it’s easy to confuse the two. You’ll find drinks, maps, ice-creams chutneys etc and venison to purchase and toilets here.

The post-code EH49 6PL works well with a SatNav and follows the route below. You may prefer to take the M8 and go north at the end rather than the M9 and go south. There’s not much in it. The following instructions go north and then drop south through Linlithgow.

Take the M8 east and then the M80 off left to Stirling, Kincardine Bridge etc. Follow the M80/A80 as per usual, until you come to the M876 marked Kincardine Bridge, Falkirk and Grangemouth. (Just before the blue motorway sign you’ll see the brown tourist sign for the Falkirk Wheel.) Take this motorway to the left: the inside lane goes off on the M876 while the M80 continues on towards Perth. About seven miles further on, ignore the M9 sign going north (on your left) and continue on for about a mile until the M876 merges with the M9 coming in on your right. It’s really very easy – just keep driving. When the motorways merge, the inside lane goes off to Kincardine Bridge so get into the middle lane and make for Linlithgow, Grangemouth etc. You sweep round Falkirk and make for Junction 4. Look out for the enormous horses’ heads (the Kelpies) on the Forth and Clyde canal. Leave the motorway at Junction 4 and come down the slip road to a large roundabout. Go right round the roundabout ignoring a road to a ski slope, a slip road back on to the motorway and take the A803 to Linlithgow with a brown signpost to Beecraigs Country Park. Follow the A803 as it twists and winds into WestPort on the outskirts of Linlithgow. At the obvious, attractive hotel, the WestPort, turn right into Preston Road.

Drive up the hill for a couple of miles until you see a sign post to Beecraigs Country Park Visitors’ Centre and Beecraigs Loch where you turn left. Drive along the road and turn right with the sign post. The Visitors’ Centre is on the left about 300 yards down.

If you’re coming up from the M8 and Bathgate you come to the Balvournie signpost first Don’t take this! Drive on about ¼ mile to the signpost to the Visitors’ Centre.

Some of the paths are separated into walkers and cyclists, but many are seldom used and others appear to go nowhere. It wouldn’t matter if you got lost but if you want to do the walk we did you need to follow the notes quite carefully.

Your walk begins by taking the surfaced path (Sutherland’s Way) from the back of the car park at the Visitors’ Centre. (There is a viewing platform here giving not-very-good-views of the deer park and belted Galloways (cows) but better views of the River Forth.) The path goes downhill, turns sharp right at some locked gates and emerges at Beecraigs Loch. Turn left along a path to reach the surfaced dam very quickly. (The tempting path going straight on again comes to locked gates!) Cross the dam, with picturesque views of the loch, swans, fishing boats and a heron, and go down the wooden steps to the surfaced path in front of the fishing lodge. Now continue along the opposite side of the loch until you reach a clearly marked beaten path on the left with a red marker.

The route now becomes more rural. This good path crosses a bridge, wanders onwards then runs parallel with a vehicular road which it soon crosses. Follow the red-marked route. (The first two paths on the left, marked on the map, go nowhere!). Your path comes to a sharp corner where two forest tracks meet. Take the path to the left. (There are two paths here marked as one on the OS map: it doesn’t really matter which you take as long as you cross a burn by a foot bridge turn sharp left on a wide path and then sharp right.

The path leads down to a junction of forest tracks where you turn left. Pick up, for a while, orienteering flags of white and red triangles. Continue to a sharp bend and just past this, to the right, is a clear path which crosses a bridge and leads down to a sluice gate and pond and appears to stop. It does continue, however, veering left, over a tree stump and follows a sort of assault course beside a murky burn! The path gradually improves, so much so that a bridge across said murky burn seductively leads you astray. If you reach the bridge, you’ve gone too far. There is a path about 20 yards before the bridge on the right. This leads clearly down, across a couple of easy windfalls, to the path along the boundary of the Country Park where you turn right.

The boundary path is fine – with deciduous trees on the right and views of open countryside on the left. These make a pleasant change from forest walking. The path meanders for ages, crossing a vehicular road and then continuing to a clearing where bikes obviously keep left and walkers can avoid the bumps and keep right.

The path continues to a junction at a kissing gate marked Witchcraig Wood, a private wood with public access. Go through the kissing gate, among wild flowers, and over a long, complicated stile! The mown path (at least on the reccé) goes down to a cross paths. The path opposite goes up the hill, eventually reaching a lower ‘top’ where there are signposts pointing to the real top and the Refuge Stone or down the hill to the Korean War Memorial. At the top there are magnificent views, and a shelter with stones from all over central Scotland. You can continue over the hill and down the hill back to the stile but you would miss the War Memorial. It might be best to come back to the lower top and then on down steeply to the Pagoda. You then have a choice of road walking or going back up!

Meanwhile, the flat-earth-brigade turn right along a mown path which emerges on the road. It’s about 400 yards left along the road to the war memorial.

After the War Memorial make your way over the hill or back along the road (your choice) to regain Witchcraig Wood and then re-enter Beecraigs Country Park. Ignoring the path along the boundary, keep to the forest track for a little way. On the left you are urged NOT to use the cycle track and indeed, a little further on and running more-or-les parallel with the first path is a newly-created ‘walkers-only’ path with blue markers. This climbs a little and then, at a junction with a cyclists’ route, goes left on the walkers’ route and out to the open area with a pond, meadow, climbing area, ice-cream van and car park at Balvournie. There are toilets here.

After a break you can make for Cockleroy Hill, signposted from Balvournie. The path goes straight to the vehicular road, crosses it and enters a car park. From here you go straight up the hill. After Cockleroy Hill return to Balvournie and take the main route back to the Visitors’ Centre.