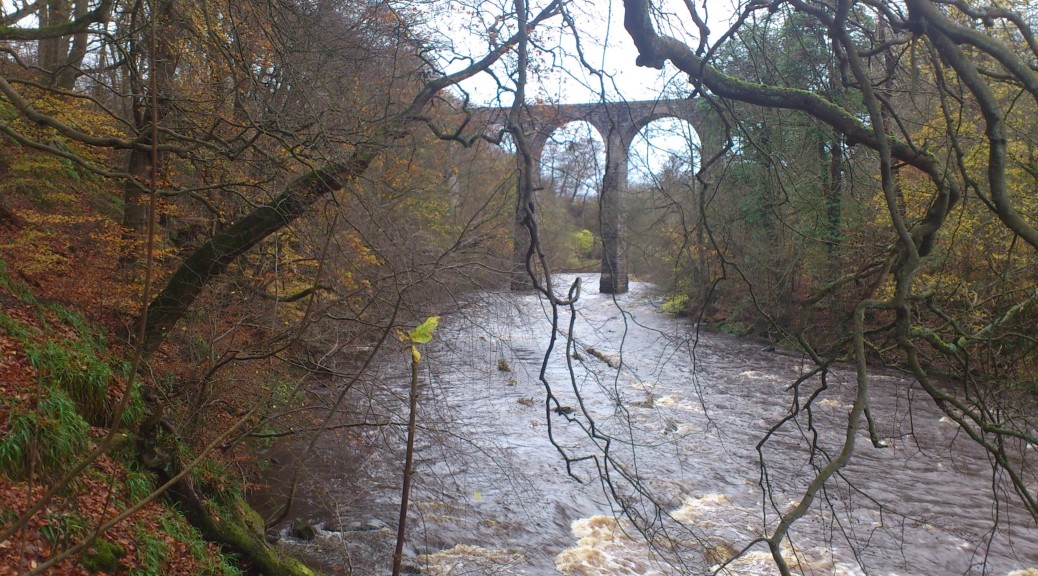 The centrepiece of this walk is undoubtedly the canal aqueduct at Lin’s Mill where the Union Canal crosses the River Avon. With a little effort it’s possible to view the river below from both sides of the canal without actually getting your feet wet! To get to the aqueduct you follow the canal feeder from the Visitors’ Centre in Almondvale Country Park along a picturesque path through open countryside. At the aqueduct you pick up the Union Canal which takes you to the Brox Burn which, would you believe, is in Broxburn! There’s a short stretch beside a housing estate but after about half a mile the path becomes prettier. You eventually come past Uphall Station (where the walk officially starts) and the next 2 miles on a disused railway line a bit sore on the legs. However, as you re-enter the Country Park the scenery improves and suddenly you’re on the Camps viaduct which carried the mineral railway you’ve been walking along across the River Avon. A beautiful stroll through the autumnal woods of the country park and we’re back to the Visitors’ Centre.

You can do this walk from Uphall Station which gets the boring bit over first. However, parking is easier at Almondvale, it’s a much prettier place to start, and there are toilets and a coffee machine.

To get there, the postal code for the park is EH52 5PE and works well with the satnav. Otherwise, getting to the park is very simple and should take about 40 minutes from Glasgow. Leave Glasgow on the M8 heading east towards Edinburgh, and stay put for about 30 miles until JUNCTION 3 (not Junction 3A which you come to first) where you leave on the left to take the A899 to Livingston (and West Calder). You swing around the slip road, back over the motorway and come to the roundabout with a whalebone structure in the centre. Take the first exit down the main Livingston dual carriageway but after 800 yards take the road to the left sign-posted Pumpherston and Uphall Stations. (There are a pile of Livingstone estate names – ignore these!). You come down to a main road where you turn left and at the next roundabout also take the first exit on to Houston Road and the Houston Industrial Estate. At the traffic lights, turn right on the B8046 (Pumpherston Road) towards the unprepossessing village of Pumpherston. A few hundred yards on, just before the Bay Leaf Restaurant, there’s a sign on the right pointing to the road on the left: Drumshoreland Road, Pumphertson and Uphall Stations and Almondell and Calderwood Country Parks.

Turn left here, go through a series of chicanes and then travel about a mile along an increasingly countrified road to a junction. There’s a big sign to Broxburn pointing left, but the sign for Almondell and Calderwood Country parks is hidden until you’ve actually turned right! Drive down this single-track country estate road till you come to the North Entrance and turn right and park. I the opposite corner of the car park, by an information board and dog pooh bin, there’s a path which meanders parallel to the main drive way and saves walking on a metalled surface. There are several paths off this to join the driveway.

From the Visitors Centre, with your back to the centre, turn right and follow the path past the toilets, across the play-park and down to the path along the river. Continue in the same direction to the suspension bridge which you cross giving lovely views of the River Avon. Go up the hill a little but, where the steps continue on up, turn left along an idyllic path beside the canal feeder. The next three miles are very pretty with the little burn running beside you, open countryside on the left and frequent little stone bridges and sluice gates and stuff. At the end you have to climb a steep set of steps to reach a rough track where you turn left.

When you get to the Lin’s Mill aqueduct it’s worth spending some time here so at the junction of paths just before it first go right to reach ‘this’ side of the canal, a turning and berthing basin and views along part of the Union canal which you don’t do! However, you can turn left along the aqueduct with spectacular views of the River Avon and Kirkhill Wood below. Retrace our steps to where the rough track forked but this time take the left–hand path which goes down to the river itself and underneath the aqueduct. The advantage of this is that it avoids a set of steep steps down, but gives very good views of the river and the aqueduct itself. Go under the aqueduct and climb up a set of steps to get to the other side of the aqueduct. If anything, the views are even better but in any case you need to be on the other tow-path.