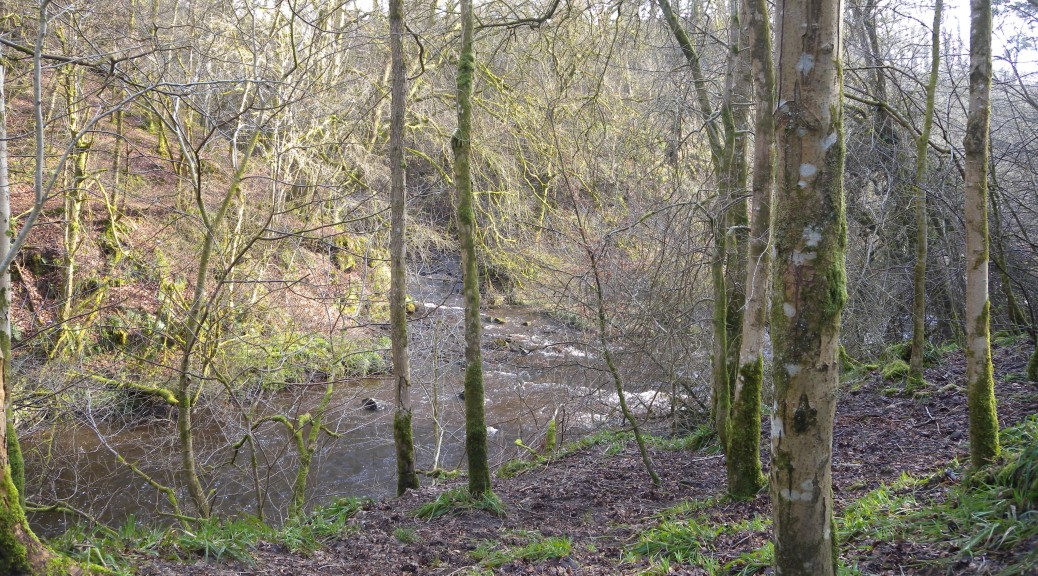 Calderwood Estate was once dubbed ‘one of the loveliest of western glens, magnificent in its grouping of craggy heights, sprinkled with trees and with the amber-tinted Calder winding through the richly wooded and festooned valley’. The history of the Calderwood estate can be traced back to the first half of the 13th century. The Castle, originally built in 1790, was the stately home of the Maxwell family. In 1845, the then owner, Sir William Alexander Maxwell, added a grand gothic frontage. The death of Sir William Alexander’s Widow in 1900, marked the end of the Maxwell lineage. The Castle subsequently passed through a number of owners, including the Scottish Co-operative Society, who worked the land and opened the grounds to the public. Sadly, by 1951 the castle had fallen into such a state of disrepair that it had to be demolished. Traces of the formal gardens and the family mausoleum are all that now remain of this once majestic country estate. Most of these paths are aggregate (plastic bottle (!), packed bark or grit ‘n stone), and are sheltered, fenced, bridged and boarded as appropriate. The exceptions are a country trail on the way to Langlands and a very muddy, but I think worthwhile, stretch at the back of Langlands Moss. Inevitably, East Kilbride intrudes occasionally but there is a surprisingly countrified bit on the way to Langlands. The route we did was about nine miles including a short wander up towards the Castle Falls a little way – towards either Trough or Black Linn and really the best bits of the park. There are several trails to suit all tastes and abilities.

Park in the car-park in Calderglen Country Park, G75 0QZ

East Kilbride is not for the faint-hearted! If you take a wrong turning you have to turn around via Carlisle (for the geographically illiterate this is somewhat exaggerated!) so getting into the appropriate lane, remembering you’re going to Calderglen and not Calderwood and being prepared to go twice round the roundabouts is helpful!

For the adventurous: if you use the postcode (G75 0QZ) with your Satnav it will take you quickly and directly, making use of the new stretch of the M74. Generally speaking, keep in the left lane until I suggest otherwise! This route takes only 25 minutes from Glasgow!

Take your favourite route to the Kingston Bridge (get into or stay in the left lane), then exit at Junction 20, West Street (left lane) and at the bottom of the slip road, at the traffic lights, stay in the left lane turning left (Wallace Street), and then left again (Dalintober Street) as directed towards the M74. Stay in the left lane to curve naturally on to the M74 (signposted Carlisle and Cambuslang). Keep in the left lane, going past Junction 1A (to Rutherglen and Polmadie) and continuing on to Junction 2 to Rutherglen and Dalmarnock. At the bottom of the slip road turn left (sign-posted City Centre/ Dalmarnock) and then sharp left again on the A724 on Cambuslang Road ‘towards the City Centre A724 (A749) Drive on to traffic lights at a major crossroads with ‘The Laurels’ opposite with a clock on the wall and Lloyd street on the right. Turn left here along what is Farmeloan Road (but not named) and drive up to traffic lights at Farmeloan Cross. (Rutherglen High street is to the right and Boots is on the opposite corner).

Go straight across (A749), signposted ‘Burnside, East Kilbride and Rutherglen Shopping Centre’, up Stonelaw Road, past the Bowling Green on the left and curving to the right beyond some woodland into Burnside. At some shops, go underneath the railway and turn sharp left along East Kilbride Road (A749).

At the Whirlies Roundabout (with big metal golf balls) go straight over, third exit (but it looks like the fourth) and you must be in the middle or outer lane signposted A725, Town Centre, Strathaven, etc. (The inner lane takes you off to Calderwood.) Go along what is now Kingsway to Whitemoss Roundabout where you pick up the first brown tourist sign for Calderglen Country Park. Go straight over and turn left at Burniehill Roundabout, signposted A726, Strathaven and Calderglen Country Park. You must now get into the right-hand lane (the left lane is local.) This becomes a single lane and you turn into Calderglen on the left. Drive along the estate road until you reach a no-entry sign, turn right and you’ll come to a large car park by the main entrance.

For the afeart: It’s much longer but easier to take the M8 east towards Edinburgh and then, at junction 8, take the M73, quickly followed by the M74 at Junction 1 towards Carlisle etc. (Don’t let the Junction numbers confuse you, follow the signs to Carlisle, the South etc.) Come off on the A725, just past the Bothwell service station, and keep in the right-hand lane of the three-lane slip road as you come down to a huge roundabout controlled by traffic lights. Go all the way round the roundabout (The left lane of the slip road goes off to Bellshill etc. and the middle lane becomes the inside lane and leads off into Strathclyde Country Park.) Ignore the slip road back up on to the motorway, and keep in your lane which leads to a roundabout and a dedicated lane to East Kilbride. All this should be sign-posted A725 Expressway to East Kilbride. Follow the Expressway up and you’ll come to the Whirlies Roadabout (as above.) In your case, take what is the second and main exit signposted the Town Centre, Strathaven etc. Go along what is now Kingsway to Whitemoss Roundabout where you pick up the first brown tourist sign for Calderglen Country Park. Go straight over and turn left at Burniehill Roundabout, signposted Calderglen Country Park. You must now get into the right-hand lane (the left lane is local) This becomes a single lane and you turn into Calderglen on the left. Drive along the estate road until you reach a no-entry sign, turn right and you’ll come to a large car park by the main entrance.

The walk begins from the car-park turning left at an Information Board and then right at a junction of paths sign-posted towards the BBQ area and Horseshoe Falls. At a T junction, turn left and go straight down to the Rotten Calder (so-called because of it’s colour – red – not it’s smell). This is a glorious path (snow-drop covered in March) leading to the top of wooden steps which zig-zag down to the river. Turn right at the bottom and left over the river. Turn right, away from the Horseshoe Falls and BBQ area. Then follow an all-too-short sheltered stretch by the river.  At the obvious end of the path, turn right and back over a bridge, but head off left towards Langlands Moss. (You could leave here, following the top path back to the Visitors’ Centre.) Your path climbs high above the river but you are safely fenced and eventually it drops down to the water again, to wind under the Strathaven Road (tunnelled and bleak). Once under, however, the path becomes increasingly attractive. It follows the river round to a wooden bridge and a junction of paths. Turn left here – you can come back the other, shorter, way if the weather is bad. You now enter open countryside and continue following the river to Hurlawcrook Road. A dogleg right and over, takes you past the information board at the entrance to Langlands Moss. This is a gravel path and, at the junction with a board walk, you turn left along the boards. Do not step off – you are now walking over bog! There are information boards along the way and, in summer, the bog would be awash with heather! It’s a bit bleak in winter! The board-walk enters a wood where you turn left and follow the path to a clearing with picnic tables and benches.

Continue in the same direction, turning right down a path marked ‘Routes around Roots’ to a bridge. Turn right here. This stretch is very squelchy – just plough on!!! At a T-junction, a marker, again ‘Routes around Roots’, directs you right and up through a lovely path through woods and back to the board walk. Go back along the way you came.

At the T junction you can turn left and follow the track back to another entrance on Hurlawcrook Road but this way was a bit bleak and urbanised. It’s prettier to go back to the same entrance you came in. Follow the route you took on the way out. At the bridge, if you’ve had enough, go straight on to the Visitors’ Centre. We crossed back over the bridge we took in the morning to the foot of the wooden steps. There are other routes but this was the prettiest so you might as well do it twice!

However, we didn’t climb up the steps (you could leave here and go back to the Visitors’ Centre) but continued along the river. This bit is lovely again – and we followed the path up to the junction with the Tor Loop (yellow route). If the weather is kind and you have the energy, go on a bit and then return to this junction. The Tor Loop climbs up a little and then turns left to follow the Kelvin Burn. Again, this is lovely. The Tor Loop crosses the drive way by which you entered the park and enters woods. The path is dry and safe and has a pretty bridge across a nameless burn. There is a diversion to ‘The Tor’ (hence the name of this loop) which is the ‘motte’ of a ‘motte and bailey castle’. Soon it parallels the outward drive from the park and brings you plump back into the car park.