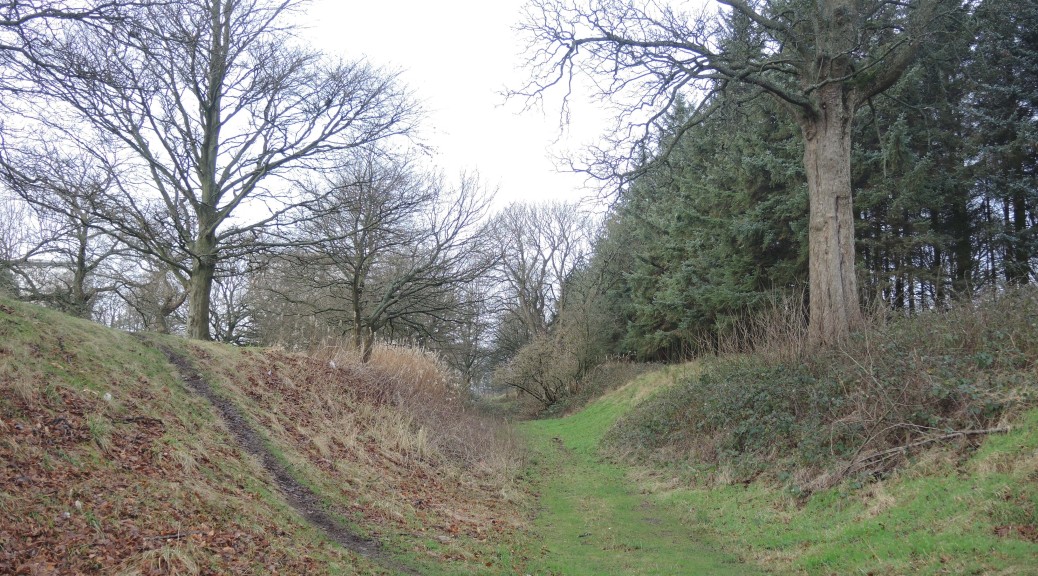 This is a cultural/historical gander as you wend your way from the 2nd century (the Antonine Wall) to the 21st (café, toilets, play-park) via two battles of Falkirk (one under William Wallace on 22nd July 1298 and one under Bonnie Prince Charlie on 17th January 1746). And there’s a 19th century chateau built in French Renaissance style complete with family mausoleum and a 19th century coal-owner’s estate. You begin with the Antonine Wall and eventually make for the Union Canal via a circuitous route through Callendar Woods. A detour takes you up into the Bantaskine Estate and the monument to the Battle of Falkirk Muir before you return via Falkirk High station. In addition to the picturesque woods, canal, and attractive views of the Ochils and the House, the walk clocks up more miles on the John Muir Way. You’ll recognise the logo on signposts and lamp posts but don’t try to make sense of this route since it divides for walkers and cyclists and we do a bit of both.

It might help to think of the geographical area in five distinct parts. You begin with the Antonine Wall to the north, under the care of Historic Scotland. The next section including the House, lake, café, play-park etc. has been restored and preserved by Falkirk Council. The third section, Callendar Woods, is part of Forest Enterprise while the Union Canal is maintained by the Forth and Clyde Canal Society. The final section, with its network of paths, is again provided by Falkirk Council although the Woodland Trust has contributed some link paths. All combined you are provided with a circuitous route of 9.5 easy miles. Most of the paths are very firm: one through the woods was muddy in places. There are two tunnels, one long and friendly and the other short and scary! In addition to a myriad mapped paths the locals, usually a boon and a blessing, have trodden down endless short-cuts so it might be wise to keep an eye on where you are!

There are at least two good cop-outs and many smaller escapes . The first is to turn left where you otherwise exit Callendar Woods and make straight for Callendar House. The second is to return via Falkirk High when instead of continuing to the Bantaskine Estate and the Battle of Falkirk Muir Monument. There is plenty to do besides walk. In addition to viewing the House itself (free to visitors), there is a museum with illustrations of and artefacts from the Antonine Wall. There’s a snack bar in the grounds and a café in the House, and two sets of toilets, again with one in the House. And you could even have a go on the chutes in the Play-Park!

Park in the main car-park next to Seaton Place at Callendar House. The postal code FK1 1YR works well with the satnav.

This is an easy and fast 26 miles from the church to Callendar House and should take under 45 minutes. (MY SATNAV took me this fast, but longer route, but you could come off on the A803 from the A80 or the A883 from the M876. If you know the way to Junction 6 on the M9 start reading from ‘Junction 6’ below!)

IGNORE the A883 and continue to Junction 6, (with ‘The Kelpies’ on the right-hand side) to take the A905 signposted ‘Callendar House and the Mariners’ Centre’. Get into the right-hand lane of the slip road ready to turn right at the T junction and traffic lights.

Turn right into the middle lane (the dedicated inside lane goes off to Grangemouth) and continue to the large roundabout. Keep in the middle lane to take the third exit (A904) signposted Falkirk/Callendar House etc. Pass the entrance to ‘The Kelpies and the Helix’ on your right and at the next roundabout (Westfield) go straight over ignoring the sign to Callendar House on the left.

At the next junction (with traffic lights and a dedicated left hand lane) turn left on the B8080 Bellsmeadow Road. Go straight over the next roundabout into Estate Avenue and straight on into Callendar House Park. (There are blocks of high rise flats to the left and a car-park to the right.) Park in the car-park beyond the barrier on your right.

Begin by walking from the car-park down Estate Road, past a golf course on your right and the Club House, Snack Bar and Play Park on the left. Continue on towards the house and you’ll come to a signpost on the left, pointing left, to the ‘Antonine Wall’ with its the earthen ramparts and vallum.

Turn right to walk along the wall but you can see it coming in on the left from the car park where you left the cars and it’s worth pausing to admire it. At the end turn right again (notice the Roman Temple on your left) and come down to a simply stunning view of Callendar House. There’s a John Muir Way (JMW) logo here. Turn left here (yellow and blue posts) to walk firstly along the good path by the lake but soon go down to the path at the water’s edge which is more attractive. At the end of the lake turn right with the path but at the T junction of paths go left up on to the main path again. (There are two signposts here: Forest Enterprise ‘Callendar Woods’ and ‘Callendar Woods Path Network’ Scottish Rights of way Society). On the main path, by the signposts, go right and then take the main path to the right to go past the Mausoleum which is on your left. After the mausoleum you want to be on the path to the south on the left-hand side of the path you’re on. There are two short-cuts. The path above the blue footprint and beside the ‘M’ of mausoleum on the OS map is overgrown but the next path on the left is much easier! This takes you to the junction at the ‘W’ of Wood. Turn left here and then first right. This good path peters out a bit through attractive woods and is fairly muddy in patches. You can skip it if the weather is very poor.

At the end of this path turn left, climb a little to gain good views of the Ochils and the Forth, and at a junction turn right on a clear path. This crosses a drive not marked on the map (a local entrance from Hallglen), but your path continues with a dog-leg to the right and then left. It continues winding through the woods to the main, sign-posted path, down to Woodend Farm. You now join up with the JMW again.

The track by-passes Woodend Farm (on the right) and curves round to go down to a country road. Turn right here and then left on a very pretty path sign-posted to the Union Canal with a JMW logo. There’s a really scary little tunnel under the railway here after which you immediately emerge on the Union Canal.

Turn right and follow the canal bank to the Callendar Tunnel built to hide the barges on the canal from the Forbes family in the House. The tunnel, if you haven’t done it before, is long but well lit and with a broad path beside the canal which is separated by a railing. You would have to try really hard to fall in! You can see the end of the tunnel from the start. It’s good fun!

At the end of the tunnel is a signpost to Falkirk High railway station and a short cut to the car park. The main walk continues along the side of the canal to a bridge signposted to Bantaskine Estate and the Seagull Trust. Cross the bridge and enter the Bantaskine Estate. The Estate was once the home of the famous coal master John Wilson, one of Falkirk’s best known and most influential Victorians.

The path either continues along the opposite side of the canal or climbs a little up past an allotment making for Lionthorne car park. At the end of the allotment is a clear path running along the edge signposted ‘The Battle of Falkirk Muir Monument’. Follow this and at the burn turn left to come to the Monument itself.

Retrace your steps but this time go straight on instead of turning right to the allotment and the way you came up. On the way down towards the canal, at a fork, take the left-hand path and emerge on the canal bank. Continue towards Glasgow but at the first bridge and road, go down to the road, turn right underneath the canal and right again to come up the other side, this time returning to the Edinburgh direction. Go back along the canal bank to the exit to Falkirk High Station.

Exit to Falkirk High Station and back to Callendar House

There is a signpost on the canal bank pointing to Falkirk High Station just after (or just before) the Callendar Tunnel. If you’re taking the short-cut it will be on your right; if you’re coming back from the full walk it will be on your left. Follow the short path across some shrubby ground and you’re soon at the station. Don’t turn right to go up immediately on to the platform but turn left to go through the tunnel underneath the railway. You emerge by the car park on your left. On the right is a set of steps, or a ramp, going up to the station forecourt. There are JMW logos on the railing showing the way. In the forecourt, with the station on your right, go to the far end where there’s a roundabout with a pillar in the middle. Turn left here (JMW sign) and then immediately right along a ‘No Through Road’ between some bungalows. The JMW sign is on a lamp post on the right. At the end of the road, at a set of traffic lights, turn left and then right into Kemper Avenue. Where the road swings to the left, ;eave it on a path (signposted) into Callendar House estate. Turn left over a pretty bridge and you come up to the Snack bar. Turn left for the cars (note the monument to the Battle of Falkirk in 1298 and right for the toilets, Callendar House etc.