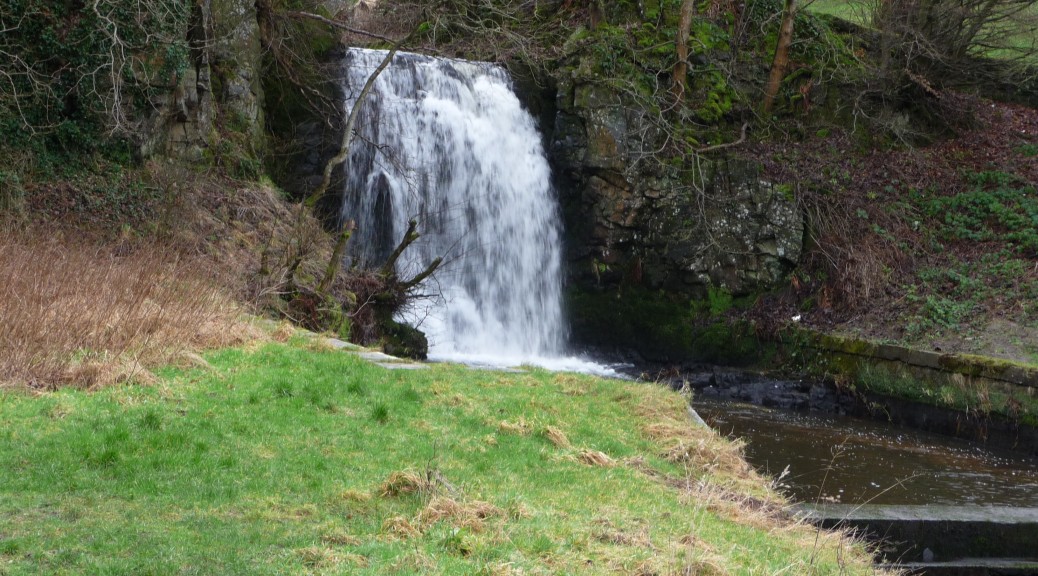 The route is a picturesque ‘lollipop’ including all the ‘best bits’ of an old and fascinating walk known, presumably, to the locals but only now hitting the wider literature. I would guess that you will have beeen as astonished as I was to find this lovely walk just off a busy dual-carriageway thoroughfare, not far from Barrhead and running parallel to the M77. One minute you’re in a very busy, urban centre among the supermarkets and traffic and literally five minutes later you’re standing in a picturesque glen. East Renfrewshire has formed a number of paths around three picturesque reservoirs and we added two more lochs and a woodland walk. It’s totally surprising and lovely.

PARK in the car-park of ‘The World Buffet’ restaurant who have kindly agreed with East Renfrewshire to allow parking on their premises. You should park neatly in the larger car-park, fronting the main road (the A726), and well away from the entrance to the restaurant which will be very busy at lunch-time.

TOILETS The World Buffet toilets are for customers only and the usual practice, mentioned on every website, is to use the toilets at Sainsbury’s. To get there follow the instructions below to The World Buffet but as you come off the M77 and turn right on to the A726, look almost immediately for a large Sainsbury’s sign on the left and turn in JUST BEFORE SAINBURY’S. This takes you up to a roundabout which you go round to exit on the right, and then up the ramp, past a huge car park on the right, to the car park for Sainsbury’s itself. Afterwards, come back to the A726 and turn left to continue past the first road (Southpark Village) to the SECOND LEFT which has a large ‘World Buffet’ cylindrical advert on a pole. Turn left here, left again into the restaurant, and then park as above.

To get to The World Buffet Restaurant car park

(Note, the Post Code, G53 7RN, takes you too far. Use it to get to the A726 to Paisley and then follow the instructions below.) It will take about 25 minutes from Glasgow.

Otherwise begin by taking your favourite route to the Kingston Bridge and the M77 towards Kilmarnock and Ayr. If you come over the Kingston Bridge keep in the lane third from the left with the M77 on the gantry above. (The first two lanes on the left go down to West Street etc.) Stick with the inside lane on the M77, ignoring roads beside you which seem to be the M77 and which will soon join you. Stay on the M77 past Silverburn, with the Park and Ride and the brown Burrell notices, and go on to Junction 3 signposted ‘A726, Paisley and Barrhead’. I would keep in the outside lane on the slip road until you approach the junction when you should get into the middle lane of the three so that you are in the middle lane as you turn right signposted ‘Paisley and Barrhead’ to go back underneath the motorway. Keep in the middle lane and ignore the slip road going off on your left (to Southpark and Darnley) and go straight on towards Sainsbury’s. Turn left at the traffic lights for Sainsbury’s if you wish to use their toilets: otherwise continue on past a road on the left to Southpark Village and take the next road on the left to turn into the World Buffet Restaurant. You’ll see the cylinder advertising the restaurant on a high pole on the left, just before the entrance.

The walk begins by turning left on the lane outside the restaurant, away from the main road, and turning left again at the first entrance into a picnic area with various signposts. We ignored the direct route and took the path sign-posted for the Southpark Village entrance, crossing a picturesque bridge and turning right at the next junction to go alongside the left hand side of the little pond. At the end, the ‘pond’ path climbs a little to re-join the Southpark Village path and you follow this up to the main route up through the glen. Dog-leg left and right here, going between two piles of grit, to pick up a slightly higher path and, at the immediate junction, turn right to follow a lovely path through the woods and along side the rushing Brock Burn..

A set of sturdy steps helps you to gain height easily and at the top bends left to the main route again. However, as the path bends left, look out for a path on the right. Turn right here, across some duckboards and follow a pretty, but muddy, path wiggling up through the woods. This is much preferable to slogging it up the road!. At the top, it re-joins the road at an idyllic view of a spectacular waterfall!!! (Well it was in February!)

The road curves round right and then left to the first of five reservoirs, this one the Waulkmill Glen Reservoir. Again the signpost gives a number of options. Follow the ‘road’ beside the reservoir, and you soon have Littleton reservoir and the Brock Burn on your right. The road ends alongside the Ryat Linn Reservoir and another lovely waterfall just below the Aurs Road. THIS IS THE END OF THE STICK and a nice place for a picnic.

To do the lollipop, your path turns left and goes up to a safe place to cross the Aurs Road. Cross over and for the next mile and a quarter you are walking round the Balgray reservoir to a car park with two picnic tables another nice , but rather bleak, place for a picnic. It is usual to retrace your steps from here.

If you want to do the full round, continue alongside Balgray Reservoir, as sign-posted, over the railway line, with fine views across Paisley, and come down to Springfield Road. A slight dog-leg left and right will take you t across the road to take some steps down to a safer road which you follow downhill (to the right). Where the side road runs out make for the Aurs Road (a continuation of Springfield Road) coming out at Albar Estates. You have to cross this road at a terrible bend so be prepared to nanny each other! At two lamp-posts up the hill a little (10 yards?) is a small path running alongside the Albar Estate entrance. The path soon grows up, goes into some trees, across a burn on a plank and up a track. The next bit is fine, with open views to Dumgoyne and Knockupple. It continues up to the railway line AND THEN GETS LOST! THE PATH CURVES ROUND AND FOLLOWS THE RAILWAY LINE BUT THE PATH YOU WANT, MARKED ON THE MAP, HAS BEEN OBLITERATED. Immediately under the railway line go straight up a muddy bank and pick up a path which makes for what we have come to call the ‘Oblong’ Reservoir. Cut through left to higher ground and take a come-and-go-path towards the wall on Aurs Road. As you get near the wall, you can see a gate on the left which you may as well make for since it’s open. Through here turn left and come back to the stick.

This time, take the road straight down, ignoring the little path through the woods. Just past a ruined building and through two pillars, turn left and either go down the first on the right (shorter) or take the path you came up (longer but prettier!). You come out by the two piles of grit and either cut through here or a little further on to the main route. Turn right and then immediately left for the ‘official’ path off the road (between two round stone pillars) which is shorter and prettier to come back to the start of the walk.