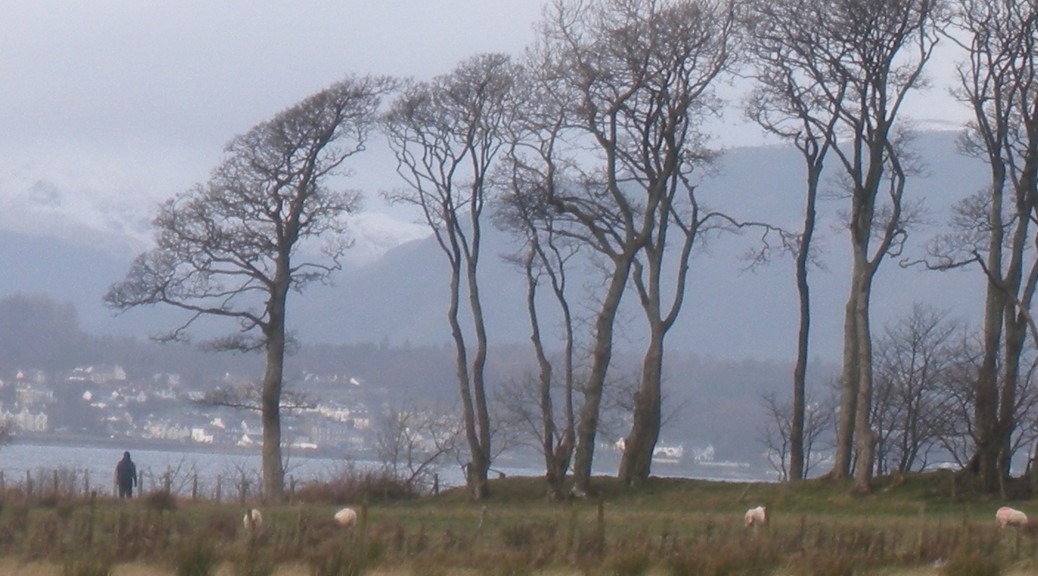 This is an interesting circular walk around Inverkip, which takes in the daff and Kip Glens and makes use of a local path to the Scout Hut at Everton which you should approach on foot only. For this reason the walk described here starts at Inverkip Station which, obviously, you can reach by train or car. There are cafe’s and a hotel nearby.

To get to Inverkip from Glasgow take the tunnel/Kingston Bridge across the Clyde on to the M8 towards Greenock and stay with the motorway. Go straight on at the Langbank roundabout. 2.5 miles from Port Glasgow, a roundabout takes you easily on to the A8, a dual carriageway. At the super-Tesco roundabout, follow the signs to Greenock, getting into the middle lane at the next roundabout still sign-posted Greenock. The simplest way to avoid Greenock town centre is to follow the route you know!

At Inverkip, from the A78 just before the marina, turn off left as signposted to go into the village and park.

From the car go to the bridge over the River Daff and take the sign-posted path on the left-hand side of the river up the Daff Glen. At the top, on the road, turn right, and go up to Langhouse. At Langhouse take the path on the left which continues beside the Daff Burn. At ‘The Bell House’ (understandably marked ‘private access’) continue along the track on the right. Continue to the end of the track where you can actually see the Scout hall on the right. Through the gate on the right, there’s a faint path making for the Scout hall which, about 50 yards from a wall, turns suddenly left and comes down to a burn. There’s a path up to a good bridge along the burn and here the  fun begins. Don’t cross the bridge, but step over to the fence on the right which has barbed wire across it. Between the third and fourth posts the barbed wire is tied with yellow string. This can be unknotted, the barbed wire dropped and you can step over the fence. The yellow string and barbed wire should then be replaced. Take the path which leads up the side of the Scout camp.

At the cross-road of paths in the centre of the campsite, with your back to the sea and facing Leapmoor Forest, take the right-hand path (not the apparently obvious concrete path going straight up) but across some rough ground making for what looks like a bridge but is a hefty stile (with a entrance for dogs!). Immediately over is a good, rocky, if muddy and steepish path beside a burn which soon levels out as you reach a LRT at Leapmoor Forest. After taking in the (hopefully) fine views across the Firth, turn left and begin the long slow descent which eventually comes out at the shore. First though, you follow the forest track down past the waterworks and then round Langhill Farm (you’re directed away from the farm itself) and out on to a country road with a sign-post pointing back the way we’ve come. (The country road actually runs from Inverkip to Cornalees if you’re following this on a map.)

Turn left here and then almost immediately right along a tracked marked ‘Private access’. Cross the railway bridge and continue along in the same direction with the railway line on the right out of sight beside you. At a huge railway viaduct slither down (there are steps but I wouldn’t trust them) on to the path below. Turn left along a broad and well-beaten path with the Kip river way below you. At a fork, keep right, following the river. The next bit needs care but emerges at a good bridge across the Kip. Cross the bridge to the little hamlet with the stables, and, just before the A78, turn right as signposted to the Ardgowan Coastal Path. Then go sharp left through the underpass. The Underpass is hidden at this point, it’s just behind a pile of sand about 50 yards on the left from the gate with the horse-shoe handle.

Once under the road, turn left as directed, hidden from the road but going in the same direction. The leads gently out on to Cloch Road, which you cross using the traffic islands provided and go straight into the Ardgowan Estate. Here, take the path down to the right, then right again along a smaller path in about 500 yards, on the first good path and follow this down to North Lodge.

At North Lodge you can now go straight down to the shore where you turn left and keep walking parallel with the shore. There are glorious views on all sides. At the ever-expanding Inverkip Marina, where there is a rope tied to a tree and a notice saying that this is a ‘Family Beach’, you must turn left, inland: the good path goes on to the marina itself.

The path now becomes a muddy lane where the contractors have been working, but you’re soon on a pedestrianized path which leads to a bridge across the River Kip: look for the Daff coming in at the confluence. Go straight over, straight on to the foot bridge, and down into old Inverkip village and your car or the station.