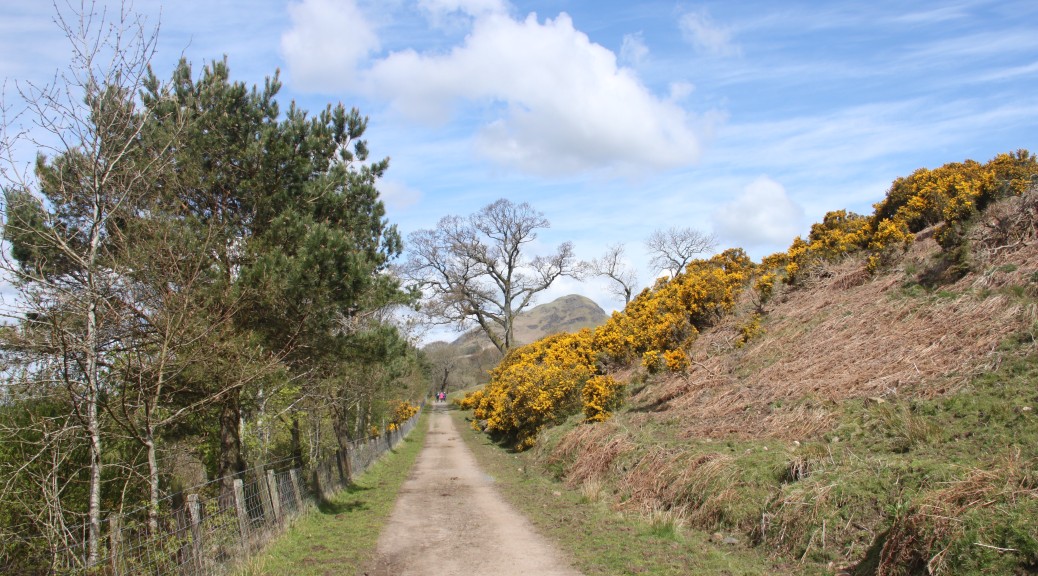 This is a tried and tested route popularly known as ‘the Pipe Track’. It’s a delightful walk, following the route of the pipe (hence its name) bringing clean water from Loch Katrine to Glasgow. The route twists and turns and takes in some very pretty little waterways as well as distant views. The outward route joins up with the West Highland way back. Those not wanting to do the full ten (very flat) miles can opt out at Killearn, have a very civilised coffee in one of the several olde world tea shoppes and bus it back.

PARK in St Kessogs Roman Catholic Church at the War Memorial in Blanefield. (you may wish to leave a donation for the privilege.) To get there from Glasgow take either the A82 (Great Western Road) to Anniesland and then the A739 (the Bearsden/Switch Road); or the A81 (Maryhill Road) both of which take you to Canniesburn Toll. Here, take the A81 towards Milngavie, (not Drymen). Continue on the A81 to the roundabout at Homebase etc. and then continue towards Mugdock, Strathblane and then Blanefield. As you go through Blanefield you’ll pass ‘The Blanefield Inn’ on your right, , and then immediately the War Memorial also on the right. You might get parked here but, if not, turn right into the Campsie Dene Road and then sharp right again up a steep but short road to the car park at the back of St Kessog’s Roman Catholic church. It’s awfy pretty. There is a notice at the bottom saying that walkers are welcome to use the car park from Monday to Saturday.but, The journey, which is 10 miles, should take no more than 30 minutes.

Begin by walking up the broad path which runs, firstly up Campsie Dene Road and then along and sometimes on top of the water pipe. Despite being just beside the A81 all the way, it seems like another world. Among the twists and turns are magnificent bridges, arches and other examples of nineteenth century engineering; the distillery at Dumgoyne; to the right, lovely views of the Campsies and Dumgoyne itself; and to the left even lovelier views of the Glen Luss horseshoe above Loch Lomond across the Strathblane valley. Ahead is the towering lump of Ben Lomond.

On the outskirts of Killearn, after High Lettre Farm, continue on to a gate and a cottage. Leave the Pipe Track on a path on the left which goes straight down with a wood on one side and a very new building with turrets etc. on the other. The path turns sharp left and emerges on Branizert Road where you turn left to come down almost opposite Drumbeg Loan, a road youe need to get on to the West Highland Way. At the end of Drumbeg Load turn left. A track to the left at Arlehaven (now burnt down), past our famous ‘Private’ sign’, wanders round to the left and then curves right. If you go straight on here you come out at a very dangerous bend on the B821. Turn left here, go downhill to the old railway line with an obvious railwayman’s cottage and platform, now a more upmarket house, and turn in right along the old line. However, if you turn left at the junction of tracks before this you come down on to the old railway line itself and avoid the dangerous bend on the B821.

The old railway line takes you more-or-less back, past a water works site to a sign saying ‘overhead cables’ with a dog poo bin etc. Turn left here along a track then up some steep wooden steps to the main road at Blanefield Community Centre.

This is quite along walk but there is no effort of climbing and plenty of variety. For a walk so close to Glasgow, it’s really a classic!