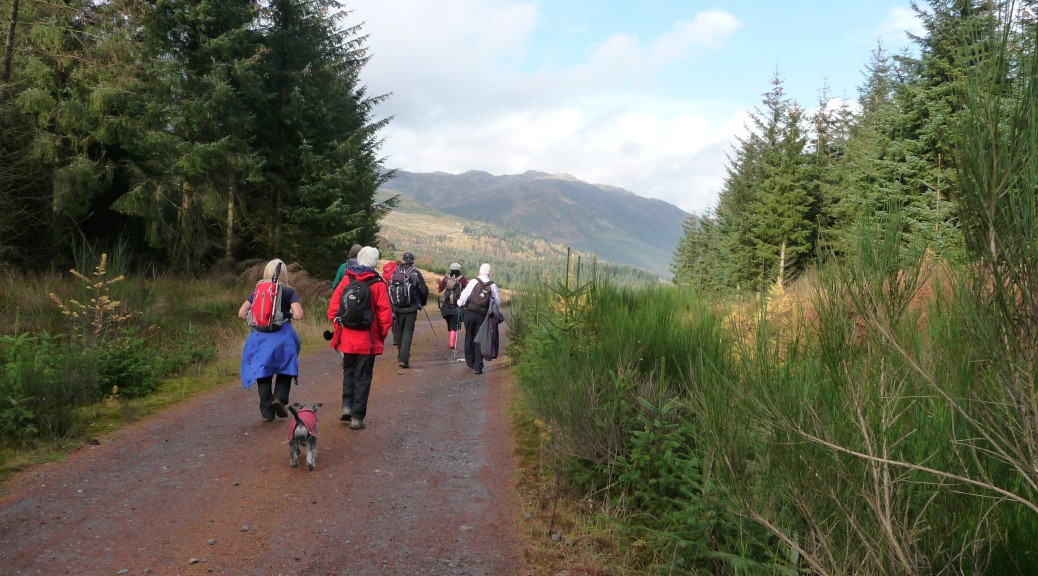 This is a lovely, and gentle, circuit of The Stank Glen below Ben Ledi. The steady but gentle climb up the track from the car park at Kilmahog soon gives you unexpectedly lovely views of Loch Vennachar to the south and then Loch Lubnaig to the north. You continue along a much-changed path below Ben Ledi to Stank Glen. Despite it’s off-putting name, Stank Glen, an alternative route down from Ben Ledi, has stupendous views both up to the rugged top of the mountain and down to the magnificent depths of Loch Lubnaig. There is a real mountain feel to this part. The path continues up over a mountain which can be full-flowing in winter but is which was just about navigable. The way back is a muscle-achingly long flat trek  along the Strathyre to Callander railway path!

Park at the Forestry commission car-park on the A821 just before it joins the A84 at Kilmahog near Callander.

To get there, go to the roundabout on the A81 at Aberfoyle near the Rob Roy Motel. (To get there take either the A82 (Great Western Road) to Anniesland and then the A739 (the Bearsden/Switch Road); or the A81 (Maryhill Road) both of which take you to Canniesburn Toll. Here, take the A81 through Milngavie, Blanefield, Strathblane, Dumgoyne, etc. to the Rob Roy Motel and the mini-roundabout) At the mini-roundabout, the quickest way is to turn right towards Callander on the A81, driving past Braeval, the Port of Menteith, turning left with the A81 and following the signposts to Callander. At the traffic lights at the main street in Callander turn left; drive through Callander and just past the Kilmahog Woollen Mills, turn left on the A821.

There are TWO car-parks. Kilmahog is the one  on the left; a little further on is the less-frequented Bochastle car park on the right.

Depending on where you’ve parked, the walk begins either by taking the safe, off-road path from the Kilmahog car-park to the Bochastle car-park and going straight up the LRT (with the car-park on the right); or by returning to the entrance of the Bochastle car-park and picking up the LR to the right. The LRT gently winds its way up through the forest on a clear LRT. There are several places where the trees have been cleared and a quarry which you’re warned not to climb!

You reach a wider part of the LRT where trees were being cleared on our walk. This should be less muddy and more attractive when the forestry work has finished. On the left is a little hidden sign-post up to Ben Ledi. On the right is a new path back down to the path alongside Loch Lubnaig. It is raw and new but well-made and will soften over time. (This is a good escape route for those not wishing to go further. This path goes down steeply, but very safely, to join the track at Loch Lubnaig. Turning left takes you to Strathyre while turning right takes you first to the bridge at the Stank Glen car-park, where climbers for Ben Ledi usually park, and then on to Kilmahog and Bochastle car-park. At this point, anyone who wanted to do Ben Ledi should continue on up, and either come down the same way or walk along the ridge and come down the Stank Glen. But beware, Ben Ledi is a strenuous climb which will take several hours. It’s much further than it looks on the map.)

Your walk, however, continues straight on, below Ben Ledi but high above Loch Lubnaig, with lovely views up to the mountain ridge and down to the River Leny and then the beginning of Loch Lubnaig. Stroll along the LRT to a junction (with Coireachrombie written across it on the map) where you take the LRT to the left which initially curves round left and then right and then straightens out to reach Stank Glen. We had lunch at a magnificent viewpoint along this stretch.

At the next junction you can go straight on to cross the burn and begin the descent. For those opting to go higher you turn left up another shortish climb, again on a very well-made path, up the left-land side of the Stank Glen. Both routes open out with a real mountain-feel under the ridge above you.

After crossing the Stank Burn make our way down the other side of the glen, dropping all the way. The LRT eventually comes out on the cycle track along Loch Lubnaig and back to the car, which is easy walking but, I’m afraid, sore on the calves! To relieve the tedium, at a concrete seat supported by railway sleepers, you can leave the old railway track and take a path closer to the river which will bring you out at the picturesque Falls of Leny.