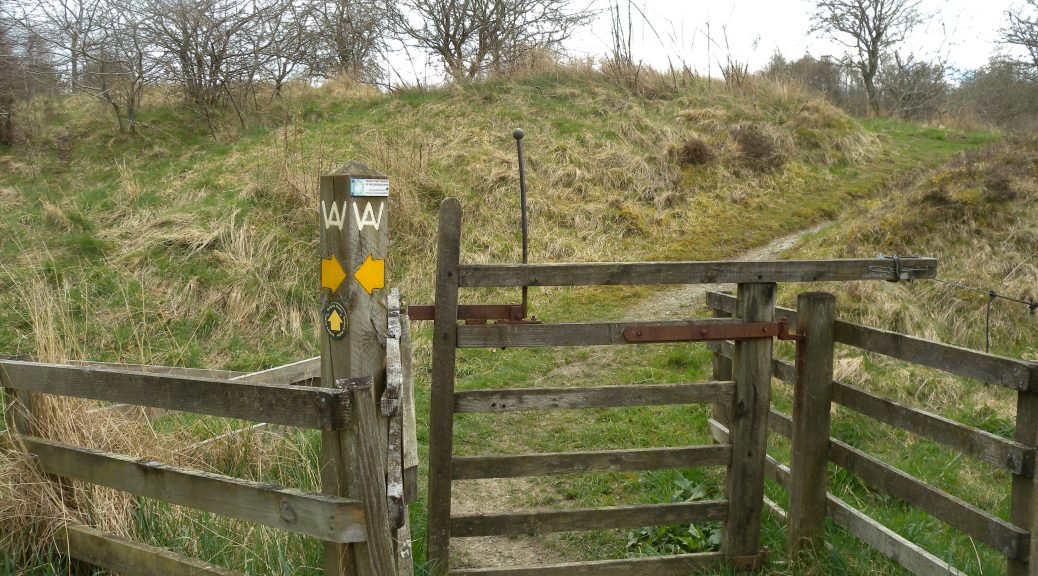 Again, this is a linear route so you will either need to use a taxi or a bus to bring you back to the start. It may be preferable to leave your car in Melrose, having arranged for a taxi to take you to the beginning of the route in Selkirk described below. This leaves you free to take your time since you are walking towards your car. If you are using a bus, you need to begin the walk in the town centre of Selkirk. If you are walking the Borders Abbeys Way then, of course, your route will take you across the A699 and continue on to Buxton.

If you are starting at Selkirk, however, it’s a long walk from the town centre and you may prefer to leave your car at a convenient small car-park on the A699 by the golf course and then use the ‘Selkirk Pathways’ (marked with a yellow triangle). Cross the road from the car park to the artificial footpath and then turn immediately right on a proper path to enter woods. This parallels the road, inside the woods and high above the golf course. The path turns sharply left and then steeply downhill, crossing a tiny burn by two planks, Continue across a golf green on the right hand side and pick up a good path again. This exits the golf course at a kissing gate. Here there are two paths, both with yellow triangles. Take the yellow triangle path to the left, which initially follows the bottom part of the golf course. Now keep following the yellow triangles across Selkirk Common. You should keep flat (avoiding any paths going up!) and veering right at every junction except the last one when you turn left. You should pass what was the old skating pond and cross several little bridges. Unless you are lost you should see the large house at Buxton, cross a substantial bridge, turn sharp right and come down to a good track through a gate.

You emerge on the BAW proper, now with BAW symbols, turning right along a delightful lane. An initially gradual climb along the track brings the Way past the side of Bell Hill and up towards a farm at Greenhead. Instead of having to pass through the farm yard the route turns left off the track and round the edge of two fields before reaching the minor road at Shawmount. Just before exiting at Shawmount there are panoramic views back over Selkirk and into the Ettrick Valley so it is a good point to catch your breath. This section is un-pathed and unpaved and muddy but a real country farm with sheep ‘n stuff! Emerge on a country road where you turn right and begin to gain height over the next mile or so to climb up Selkirk Hill. This part is a pain until you reach Lindean Moor Farm and Halfcrown Corner from where the remainder of the walk is idyllic and not to be missed.

‘On the left and below in the valley is the little community of Lindean. It was in this community location that Selkirk Abbey was built in the early 12th century, but it did not remain for long and the Monks chose to re-establish themselves in more fertile lands at Kelso. On the right is the Lindean Mast beaming television signals to the Central Borders’ community. To the side of the mast on the roadway there are more attractive views, now opening up the countryside to the north and northeast. To the west the views are up the Yair Valley and towards the Tweeddale hills.’

Near the TV mast you’re directed left down a lovely lane past some astonishing sheep, straight over a yellow road, and then up just a bit because you’ve done the real climbing. The old drove road is level-ish until you go down to Abbotsford. The views, particularly to the south, are wondersome.

Just as you approach a hill, with an obvious path going up and over, you discover that, oh frabjious joy, you’re going around! And just as you go around – the Eildons appear, plonked on your right-hand side. They are close by and viewed from an unusual angle with Eildon Wester Hill in the foreground and Eildon Mid Hill beyond and Eildon North Hill, the one which normally dominates the scene, beyond that.

As you leave the overwhelmingly photoesque Eildons and Cauldshiels Loch the BAW goes off on the right and then takes to the road for about two miles. To avoid this road walking you might like to take a glenda-white-route on what is, in fact, a come-and-go-occasionally-waymarked path. At Upper Falconside, where the road turns right, and a driveway turns sharp left into the farm, take the track at ‘ten-to’ down past past Faldonside Loch (beautiful). Then take an obvious track to the right which on the map appears to go nowhere. It’s sign-posted with a yellow triangle and climbs uphill. At the top, don’t curve round with the track but continue straight on to the right of a fence and a wooded gorge. (At the top there is a stile over the fence. Ignore this.) Go steeply down, occasionally finding both a path and a yellow triangle and, when in sight, make a five-bar gate. Don’t go through this but go further to the right to exit via a kissing gate, down a path and on to the road (the B6360). Dog-leg to the right over the road and enter the Abbotsford Woodland Walks. Here go right to follow a good path until you reach Scott’s House and Garden. Don’t enter the courtyard, but keep to the exit on the right and come out past the restaurant and back on to the BAW proper. You may want to use the toilets and have a quick look around the shop and exhibition, both free. There is also a restaurant up the stairs.

Note that this section is joined in places by The Walter Scott Way, The Southern Upland Way and the St Cuthbert’s Way. A thistle within a hexagon is the sign of a Scottish National Trail. Any yellow triangle means that the National Trails are also, at this point, public paths for local walks.

This section begins at the restaurant/gift shop. The path runs vertically from the B6360, between the car park and the restaurant, and continues down to the River Tweed. Turn left or right depending on whether you’re coming from the restaurant or the car park and follow the sign-posted way towards the river. Just before the river, turn right (sign-posted) along a tree-lined path. The path undulates slightly until you quickly reach the A6091 above and a modern bridge across the Tweed. Here the path goes under the bridge on decking then up the other side and round a side of the Tweedbank community.

Safely under the road, the path continues beside the river to Tweedbank. The path follows the river (at one point across a rickety-bridge) until it reaches the old railway line. The path passes under an arch of the old railway line bridge, and then quickly returns to the river bank. The walk curves to the east (right) passing by Lowood House before temporarily leaving the banks of the river to come onto the Lowood House drive, crossing a public road at the “Bottle Bridge” and again regaining the riverbank behind the Bay Waverley Castle Hotel.

The path opens out to to a broad track beside the river. There’s a slight climb just before Melrose up to the church, before returning to the river. Go past (NOT OVER!) the Chain Bridge and turn right up the Annay Road to the Abbey.

One thought on “Selkirk to Melrose”