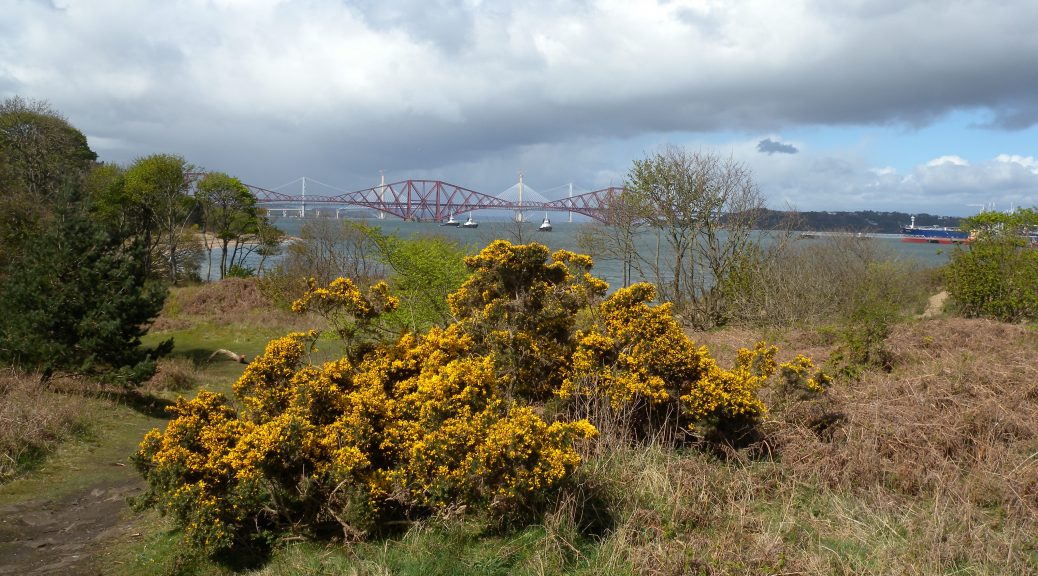 What with two and a half iconic bridges, Robert Louis Stevenson’s ‘Hawes Inn’ which is mentioned in ‘Kidnapped’  and the islands of the Forth (Inch Garvie, Long Craig, Inchcolm, the Cow and Calves, Inch Mickery and Cramond Island itself) this is a most photogenic walk. If you have never been to South Queensferry you’re in for a treat just driving through the cobbled streets: throw in Dalmeny House from several angles, Hound Point and Barnbougle Castle,  a couple of picturesque cottages  and the view of Cramond from the beach and you have a perfect day.  It’s very easy walking on LRTs and lovely paths beside along the shore all of which are firm packed. The round trip is 9 miles but  you can turn back at any point, lie in the sun, or go for a coffee in South Queensferry.

Park in the car park facing the River Forth, at the far end of South Queensferry, almost underneath a stanchion of the rail bridge and just before The Hawes Inn (highly recommended!). As you leave the cobbled winding streets of South Queensferry behind, enter the car-park on the left – it’s one-way. There are toilets opposite.

To get there: Satnav Post Code: EH30 9TA for The Hawes Inn
Getting there is very easy until the last 3 or 4 miles! The mileage and timing seemed about the same which ever route you take  at about 55 minutes and 44 miles, although  (as of May 2016) there are road works on Route two – the M8. In any case Route One is easier to follow with wonderful views of the new bridge.

Route One:
Take the M8 east (towards Edinburgh) from Glasgow and then the M80 to Stirling, Kincardine Bridge etc. After about 15 miles take the M876 to Falkirk, Grangemouth etc. DON’T TAKE THE FIRST M9 GOING OFF TO THE LEFT – this is the wrong direction. Stay on the M876 and then move over on to the M9 while the M876 goes on to Kincardine Bridge. (You’ll hardly notice that you’ve now joined the M9.) Stay on the M9 for about another 15 miles until Junction 2 with the B8046, when a brown tourist notice takes you left, advertising Hopetoun House. At the end of the slip road turn left on the B8046 and at the T junction, turn right on the A904. Drive for about 4 miles through Winchburgh, Newton etc, Almost immediately after an elongated roundabout turn left on to the B924 to South Queensferry (Bo’Ness Road then Hopetoun Road) which goes underneath the motorway above. Continue to follow the B924 (Hopetoun Road) through the outskirts of South Queensferry. At a very awkward junction, turn left onto Newhalls Road (still the B924) which ducks and weaves through the town.

Route 2:
Take the M8 towards Edinburgh but stay on the M8 for about 37 miles until you reach the M90/M9 signposted to the Forth Bridge (A90), Stirling (M9). Watch that the slip road comes up on to the M9 rather quickly. Continue on the M9.

At Junction 1A take the A90 exit signposted to Perth and Dundee. This is a huge curve round to bring you down on to the the M90 below. Continue on to M90.  Continue to a very large roundabout where toll traffic for the bridge goes straight on.  Go right round and take the third exit, B800, Ferry Muir Road, towards Kirkliston. At the next roundabout take the 1st exit on to Kirkliston Road, B907. Continue to follow the B907 down past Dalmeny Station etc. At a very awkward junction, turn right onto Newhalls Road (B924) which ducks and weaves through the town.

The Walk
Your walk is simple! From the car park  continue in the same direction, past the pier for Inchcolm on the left, and The Hawes Inn on the right (dating back to the 17thc.), and the Forth Rail Bridge above (completed in 1890)! Don’t go up the hill with the road but hug the shore line with fantastic views of the three bridges.

The first quaint white-washed building on the left was once a World War I gun emplacement, then a tearoom and is now an office. With woodland on your right and the river on the left you soon enter the Dalmeny Estate and approach Long Craig Pier which used to be one of the ferry crossings across the Forth. (There were several such piers and crossings depending on the tide.) It might be worth doing this to take photos.

Go through the white gate beside ferry cottage as you continue towards Hound Point. Just before, at Peatdraught Bay, is the first delightful alternative. At a clear junction with three huge tree-trunks,  take the firm path to the left down nearer to the shore and into a grassy knoll. This is lovely. It re-joins the main track at five huge tree trunks which you should look for if you want to take the diversion on the way back.

The Estate notes say: ‘It is worth taking a detour onto Hound Point headland, which, according to folklore, is haunted by a dog owned by Sir Richard Mowbray who died on the Crusades. The views from Hound Point are magnificent. There are numerous points of interest including Inchcolm Island with its old abbey and the Forth Bridge. Opposite the turning to Hound Point and up the hill within the woodland are the remains of World War I gun emplacements, part of the Forth naval defences.’

Continue past Fishery Cottage (so-called because salmon was fished from here until the 1950s). The next significant point is Barnbougle Castle, restored and privately owned. And difficult to photograph from here – there are good views looking back from further on!!! Again, the Dalmeny Estate notes say: ‘Barnbougle Castle may be glimpsed through the trees. The castle is on the site of a medieval tower house built by the Mowbray family which was destroyed and then rebuilt in the 19th century. At Barnbougle the fifth Earl of Rosebery (Prime Minister) practised his speeches in a gallery hall built for the purpose.)’

Just beyond Barnbougle Castle  you come to a golf course and your first view of Dalmeny House. (The view was excellent but even better on the return leg.). At the corner, unexpectedly, and with the main notice lying on its back, is a John Muir Way signpost showing that cyclists should continue on the road but walkers should turn sharp left to walk along the river. This is a wonderful improvement. The path goes straight down to the river (and a lovely tree trunk to sit on) then sharp right along the river bank. At the end the path continues through the woods going slightly inland to cross the briskly flowing Cockle Burn on a sturdy footbridge beside a rotting seat! The path emerges on a track beside some picturesque cottages (Long Green Cottages which were built for estate workers) and then continues on to rise slightly with lovely views of Snab Point, the river and Arthur’s Seat. There is a huge boulder here where you might stop for lunch. Continue on to Eagle’s Rock and then come to a full stop!

The way ahead and around Cobble Cottage is blocked but it is worth taking to the beach at this point just to look at Cramond. Unfortunately, at the time of writing, there is no way of getting across the River Almond. After viewing the river(s) and the village, return to the sharp turn in the path where the John Muir Way turns sharp right and you went left on to the beach.

Follow the JMW uphill a short distance and take the JMW cycle route inland but higher up. This is well worth doing, not least for the better views of Arthur’s Seat and even across to Scald Law and the Pentlands. This path comes to a crossroads with lots of alternative walking routes. But you may as well stay with the JMW through Long Green to the Estate Road going down to Dalmeny House. There are spectacular views of the house.  Again, the notes say: ‘From the golf course there are beautiful views of Dalmeny House which was built in 1817 to a Tudor Gothic design by William Wilkins. A rare type of artificial stone called Coadestone was used in the more decorative elements on the house such as the finials and panels on the façade. The house was used as an auxiliary hospital during WWI and during WWII the stables to the rear were used by the Army for a Barrage Balloon Unit. The house was damaged by fire during WWII, evidence of this can be seen in the use of a new copper roof on the southern wing of the house.’

Here re-join the outward stretch and retrace your steps to South Queensferry.