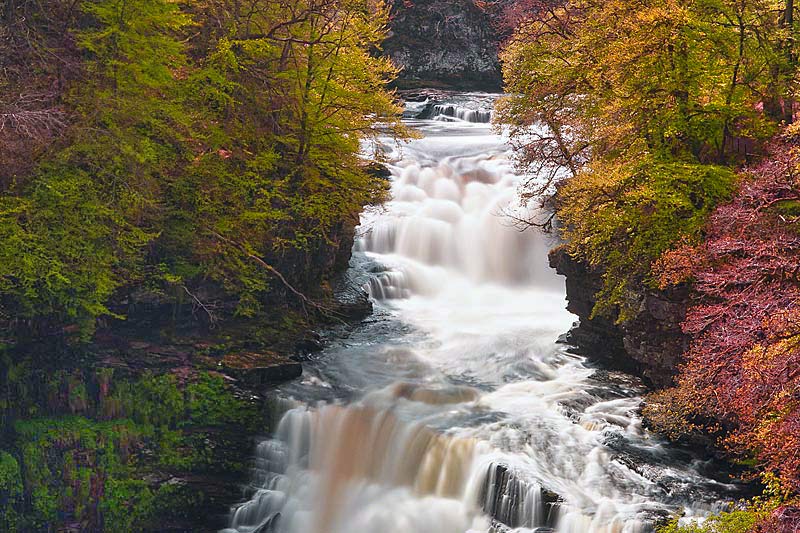 There is parking at Lanark Railway Station but, apparently, there are no toilets and parking is for rail users only. The public toilets are in either the South Lanarkshire Leisure Harry Smith Centre or the South Lanarkshire Leisure Swimming Pool both of which are in Thomas Taylor Avenue behind the Rail and Bus Station so it would be best to find a parking slot somewhere along there.

You are following the ORANGE route on the Tourist Information Leaflet. The distance is a maximum of 9 miles and follows tarmac roads, gravel footpaths and a grassy racecourse. There are a number of steps – no stiles. A couple of sections are along the edges of roads open to traffic.

To get there the shortest route still seems to be:

Take the M8 east towards Edinburgh and then take the M73, quickly followed by the M74 towards Carlisle etc.  (At junction 7, on the M74, take the A72 down the Clyde valley. Continue on through Rosebank, Crossford, and Kirkfieldbank where you climb up a steep hill to a really nasty junction with the A73. Here turn right, go up the main street through the town centre and at the junction at the top (at traffic lights), take the right hand road towards the station. Turn left along Woodstock Road, just before the station, and right along Parklands Oval which becomes Thomas Taylor Avenue running parallel with the station.

Walk back to the Railway Station.


From Lanark railway station turn left along Ladyacre Rd away from the town centre. Beyond the tourist info turn left into Whitelees Rd. Follow for ½ mile. At Lockhart hospital continue straight on. Just beyond the hospital as the road goes to the left, go up a short slope ahead onto a disused railway. Follow the path to the car park at Lanark Loch. Leave the railway path and descend to the loch.

Go around the loch in a clockwise direction until you reach a steel and concrete bridge. Take the next left and follow the footpath uphill to the equestrian centre.

To go around the racecourse follow the road to the left of the equestrian centre and follow the obvious circuit to return (adds about one mile).

(Just seven years after the first powered flight, Lanark racecourse hosted what was only the second international airshow in the UK. More than 200,000 spectators gathered to watch and a new railway station had to be opened. The event is commemorated in a public artwork at the entrance to Lanark Loch. The redbrick tote and the outline of the circuit is all that remains of more than seven centuries of racing at Lanark. One of the races that ran at Lanark was the Silver Bell. The winner received a trophy that dates back to the early 17th century.

To continue with the route go to the main road and turn left.** Walk for about 50 yards before crossing the road that leads to the Scottish Power Bonnington Power station. Follow the road lined with beech to Robiesland farm. At the end of the tree-lined section follow the road round to the left and continue downhill following a sweeping bend to the power station. For visit to Corra Linn turn left and follow footpath uphill to viewing area (5 mins.)

(At more than 90 feet high the Corra Linn is the highest of the four Falls of Clyde and one of the most powerful in Britain. Above the viewing area is a perfectly positioned pavilion. Once lined with mirrors, anyone standing at its centre felt as though they were at the centre of the Falls. The Corra Linn has been visited by William Wordsworth, numerous crowned heads and painted by JMW Turner. Be on the lookout for the fast moving peregrine falcons that nest on the cliffs.

The village of New Lanark and its tiers of mills and tenements is an impressive site as you reach the end of the river walkway. Begun in 1786 by Richard Arkwright and David Dale the village would later be renowned for the innovative employee welfare programme initiated by Dale’s son-in-law Robert Owen. The village is now a UNESCO World Heritage site.)

Go through the arch and follow the canal on your right through New Lanark. At New Lanark hotel hook round to the right and then turn left to go through main gates. Turn left uphill past the red telephone box.

Close to the top of the hill but before the bend, turn left to follow the Clyde Walkway. Continue along the walkway to the viewing platform and then over the suspension bridge. Descend the steps to follow the Clyde downstream. The path eventually climbs in a series of bends uphill to Castlebank Park.

Turn right in the park and continue to the play park. Follow the footpath to the left of the play park uphill across a grassy area. (Castlebank Park is in the process of being refurbished … it now has a Horticultural Centre, renovated and replanted gardens, William Wallace Memorial Rose Garden, Sculpture Trail including a 7 ft high Wallace wooden sculpture and a bog garden.)

(Lanark Thistle bowling club, on the top edge of the park, now occupies the knoll on which stood Lanark Castle. In 1297 Wallace attacked the castle and killed the sheriff.)

**Shorter Walk – go to main road and turn right. Following the pavement, you will pass the entrance to Lanark Loch and the “Spirit of Flight” Air Show Memorial. Further on you will see on the left, the old Cemetery with St Kentigern’s ruins where Wallace and Marion Braidfoot were married. Keep straight on down the Wellgate to arrive at St Nicholas’ Church at the bottom of the High Street. Turn right, and continue on right, back to bus/ rail station.