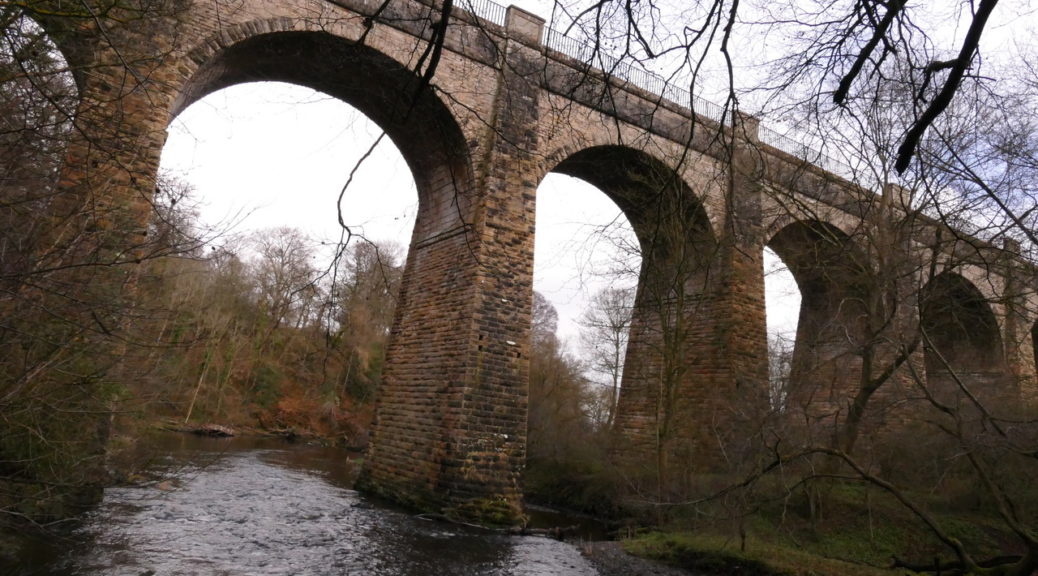 This is lovely, varied walk is full of twists and turns, a canal and a river and paths not marked on maps! With a bit of history thrown in it’s perfect.

There are two opt-outs. The first is to stay in the park.  There are ample walks, an art trail (two pieces from which we all see) and a park café. The second opt-out is to return after the visit to Muiravonside Kirk by returning to cross the canal at Haining Bridge and following the route back which you will take alongside the canal. This cuts out three miles, in wet weather almost all  mud.

Park in the main carpark in Muiravonside Country Park. The Satnav postcode of EH49 6LW gets you to the village of Muiravonside but then misdirects you. If you’re following this, once in the village, keep on the road in the direction of travel and turn right into the park.

To get there, for those without satnavs.

Take the M8 east (towards Edinburgh for the geographically challenged) and then the M80 off left to Stirling, Kincardine Bridge etc. Follow the M80/A80 as per usual, until you come to the M876 marked Kincardine Bridge, Falkirk and Grangemouth. (Just before the blue motorway sign you’ll see the brown tourist sign for the Falkirk Wheel.) Take this motorway to the left: the inside lane goes off on the M876 while the M80 continues on towards Perth. About seven miles further on ignore the M9 sign going north (on your left) and continue on for about a mile until the M876 merges with the M9 coming in on your right. It’s really very easy – just keep driving. When the motorways merge, the inside lane goes off to Kincardine Bridge so get into the middle lane and make for Linlithgow, Grangemouth etc. You sweep round Falkirk and make for Junction 4. Look out for the enormous Kelpies (horses’ heads) on the Forth and Clyde canal. Leave the motorway at Junction 4 and come down the slip road to a large roundabout. Go right round the roundabout ignoring a road to a ski slope, a slip road back on to the motorway and the A803 to Linlithgow ( and ignore  the seductive brown signpost to Beecraigs Country Park) and take the next exit, the A801 signposted to Bathgate, Livingston and Maddiston (and the M8). Drive straight down this road for two miles till you come to Bowhouse roundabout. Turn first left on the B825 (signposted in brown to Muiravonside Country Park) and half a mile on you’ll come to the Country Park on your right.

Turn right into Muiravonside Country Park. Drive right up the magnificent drive way, past the overspill (woodland) car park on the left , to the main car park and turn in left for cars as directed. The journey from Glasgow is exactly 35 miles and should take about 40 minutes.

Toilets: there are two sets of toilets at the main car park: the nearest are at New Farm next to the car park; the others are at the café which, in fact, you walk past on the walk.

From the main car-park walk back down the main driveway to a substantial signpost pointing left along a good track towards Candie. Turn left here and, ignoring a signpost directing walkers back to the river, continue on to an unnamed, unmarked path above the farm of Redford. This unnamed path is best noted by the angle of the track, which is marked, to the left. On the map it looks as though there is no continuing path but in fact a good path curves round and down just above the farm. It joins the official route along the River Avon just above the river. Turn left here to make your way down a steep, muddy slope. (You may find it easier to keep to the fence until you reach the river.) At the bottom turn left to  follow the river through a delightful meadow and then through the steeply wooded section of Carriber Glen. The exit is barred by a landfall and you are, gratefully, directed up to the café and toilets. You continue above the river stopping to admire the ‘Owl’ bench and owls in the tree which are part of the ‘Art in the Park Trail’. Go through the Stirling family cemetery which is strangely moving. The path slopes down eventually, joining an old mill lade, and coming,as directed, to the old Mill and the Park offices.  Continue along a particularly beautiful stretch of the River Avon to the magnificent aqueduct towering above you. Steep steps take you up the considerable height to the Union Canal towering above you. At the top you turn back on ourselves to the canal. Once on the canal bank,  turn right towards Falkirk and away from Linlithgow but if you’ve never been here it’s worth walking back along the aqueduct to admire both the river below and the engineering miracle.

You now follow a metalled path along the canal bank, passing Bridge 49. Pass a canal inlet with tied up barges. Note when you come to Haining Bridge since this will be the return route for those opting out. However, it is well worth continuing  to Muiravonside Kirk. This is hidden to the right but is easily found at a small burn flowing over the canal path and into the canal. Just before this burn, there is a path over a broken wall with stone steps which takes you into the large car park at Muiravonside Kirk. (If you wish to avoid the additional 3 miles, turn back here and retrace your steps to Haining bridge where you can cross the canal and continue down along the opposite side. When you come to a junction of paths, continue straight on and follows the notes below.)

However, it is worth at least glancing at the cemetery, before continuing your way parallel to the canal path. From here there are fine views of Almond Castle. This little path soon rejoins the canal towpath.

Continue along the canal bank to Bethankie Bridge. Just across the road below, a fine set of steps goes down to the right on to the road. The road then goes under the canal by a narrow tunnel. This part of the road is also used by cars who exercise caution but who cannot see the tunnel until they are almost on it. Beware! Just under the tunnel, to the left, is a Public Footpath sign directing walkers through a gate and up through the woods. The path climbs to a driveway coming up from the road and into The Haining. Cross this driveway, following a public footpath sign. The path should go straight up the hill, but locals have struck off diagonally to cut off a corner. At the top, the official path comes in from the left and continues to the right but, again, the locals have continued diagonally. It all meets up by Parkhall Farm where you are directed by the footpath sign straight down and then to the right. This emerges at a metalled road with the path ahead barred for obvious reasons! On the metalled road, turn left and follow the road across the Manuel Burn.At the T junction, turn left and then, at signpost, cross the road and climb up beside some trees towards some houses. The first part of this path can be very muddy. However, as you circle round the houses the path improves and comes out on a lovely country road with views across the Bathgate Hills and towards the Forth Bridges. Pass signposts to Muiravonside (on the right) and Haining Bridge (on the left) both of which you ignore.

The next section is a delightful soft path along the canal but slightly above it. You soon reach a picturesque inlet where canal barges  are tied up. Some of the barges are residential. There are benches here to sit and admire the view. There are several paths leading back to the park but the best is to continue past this inlet with the barges, following a signpost to Muiravonside, which comes out in the car park of Bridge 49. Go up through the car park, turn left at the road and then, just before the bridge over the canal, cross the road and take the signposted track back into the park. At a major junction of paths turn right and follow the track back to the car park.