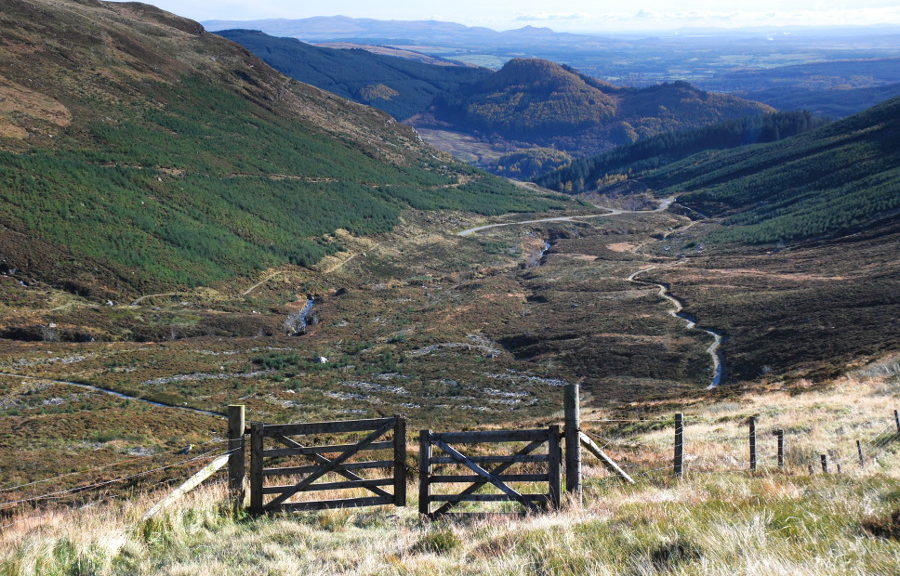 Starting near Kilmahog the walk heads gently uphill winding its way through woodland and culminating in views over Loch Lubnaig which lies between Ben Ledi and Ben Vorlich.  The path then strikes inland and up the Stank Glen.  After traversing the stream the path returns on the north side of the glen and descends towards Loch Lubnaig (the name derives from the Gaelic word meaning ‘crooked’).  Close to the shoreline the path picks up the course of the old Callander and Oban Railway line for the return journey to the starting point.

If you wish to be more adventurous you may want to return on another occasion to take the path up to Ben Ledi which has featured in many photos from past walks.

Starting Point:
The starting point is at OS Reference NN 607 080 which is the Forestry Commission car park adjacent to Bochastle Hill near Kilmahog.

Getting there:  45 miles/60 minutes
Take your favourite route out of Glasgow to join the M8 towards Edinburgh.  Exit M8 at Junction 13 onto the M80 (Stirling).  Exit M80 onto M9 (Stirling).  Option [1]: exit at Junction 10 onto A84 and *continue through Doune and Callander to Kilmahog and turn left onto A821.  After about 350m turn right onto a gravel roadway flanked by Bochastle Forestry Commission signs.  Option [2]: continue to the roundabout (Junction 11) and take first exit onto B824.  At the T junction turn left (A820) towards Doune.  Continue through Doune and turn right onto A84 and *continue as above.  Parking is free.

The Walk:  The Stank Glen – 10.0 miles
From the north end of the car park take the path/Land Rover Track (LRT) that gently climbs and winds its way through the forest.  Views over Loch Venachar, to the southwest, should be available from the path.  The LRT crests at a height of about 250m from which there should also be good views, to the north, over Loch Lubnaig.  At a crossroads of paths continue onwards (turn left to climb Ben Ledi or *right for a short cut down to the old railway line).  When the LRT joins another LRT turn sharp left and follow this uphill.  *For another shorter option turn right and follow the LRT down to the cycle path by Loch Lubnaig and turn right.  Ignore paths/LRTs on both left and right.  When the path/LRT bends left it is entering Stank Glen with Ben Ledi high up on the left.  Follow the path/LRT deep into the glen (ignoring a short link path on the right that avoids the glen) and as the path turns right to return on the north side of the glen it crosses the Stank Burn and passes Old Shielings.  Ignore the short link path (now on the right) and follow the LRT as it gently descends towards Loch Lubnaig.  Ignore the LRT that comes in from the right and continue in a northerly direction.  The LRT does a 180˚ loop to the right close to Tom Bheithe before finally descending to Loch Lubnaig.  Turn right and join the route of the old Oban and Callander Railway line which is now National Cycle Route 7.  Follow this cycle path for about 5km, passing the Falls of Leny.  Turn right when the cycle paths meets the A821 and follow the path, adjacent to the road, back to the car park entrance and follow the LRT to the parking area.