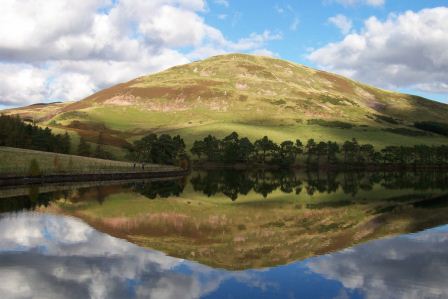 Starting at the Red Moss Nature Reserve, near Balerno, this is a walk in the Pentland Hills Regional Park. It will cross the Threipmuir Reservoir and pass through wooded country emerging at the foot of the main Pentland hills.  The hilltops will be clearly visible but do not despair!  An easy walk across the moor, with wonderful views of hills and water, will gradually descend to The Howe, a small cottage at the end of Loganlea Reservoir.  The reservoir is used for fishing.  We turn for home up an impressive  gully, Green Claugh and contour the hill, returning via Threipmuir Reservoir to the start point.

Starting Point:
The starting point is at OS Reference NT 166 639 which is the car park near Red Moss (of Balerno) Nature Reserve.

Getting there: 46 miles/65 minutes
Take your favourite route out of Glasgow to join the M8 towards Edinburgh.  Exit the M8 at Junction 3 onto the A899 (Livingston) and continue south.  At Lizzie Brice’s Roundabout take 2nd exit onto A71 (Edinburgh) and at the next roundabout go left (A71).  Turn right onto the B7031 (Kirknewton/Balerno);  continue through Kirknewton and at the junction with the A70 turn left and continue for about 1 mile.  Then turn right (turning is not signed), shortly after stone buildings on the left, onto Glenbrook Road towards Balerno.  Turn right (opposite a large stone wall) into Johnsburn Road and continue (now Cockburn Crescent).  At the junction at the end of the road turn right onto Mansfield Road. Continue south on this narrowing road and look out for a small sign (Pentland Hills Regional Park Threipmuir) and turn left.  A No Entry sign is visible but bear left into the car park.

The Walk:  An Amble in the Foothills – 7.5 miles (12km) (with options to extend or shorten the walk)
It is recommended that a Harvey Superscale map is used as some of the paths are not shown on the OS map.

The walk starts from the car park and crosses over the Threipmuir Reservoir  at Redford Bridge and continues south on the road towards Bavelaw Castle. As the road turns left to the castle turn right and after a short distance turn left following a line of trees. Pass the sheepfold and continue on Red Road passing Hare Hill on the left.  Follow Red Road until a junction of paths close to West Kip and turn left. After a short distance there is a choice of [1] taking the left fork to contour the hill to the north towards Lover’s Loup and then swinging left (north) through Green Cleugh; [2] take the right fork over West Kip (an ascent of about 150m) and continue to East Kip and turn left at a junction of paths and descend to Lover’s Loup. Alternatively, at this junction there is also the option [3] to continue on the path over Scald Law and descend to the Old Kirk Road turning left at the junction of paths towards The Howe, passing The Pinnacle on the right, and continuing into Green Cleugh.

Pass through Green Cleugh and at the junction of paths, at the north end, take the right fork and, after an initial short ascent, the path contours around Black Hill towards Black Springs and the eastern end of Threipmuir Reservoir.  (Alternatively, for a shorter walk, there is the option [4], to take the left fork towards Bavelaw Castle and then to retrace the outbound route back to the car park.  Note, however, that this path is through boggy terrain which, although shorter, may be more challenging.)  At Black Springs turn left and follow the path over and around Threipmuir Reservoir. Take the left path near Harlaw Reservoir and cross the bridge where the Threipmuir and Harelaw Reservoirs meet and turn left.  Follow the path back to the car park.

Option [2] does not add significantly to the overall distance of the main route.
Option [3] adds about 1.5km to the walk.
Both options [2] and [3] are more challenging because of the ascents and descents.
Option [4] will shorten the main route by about 2km. 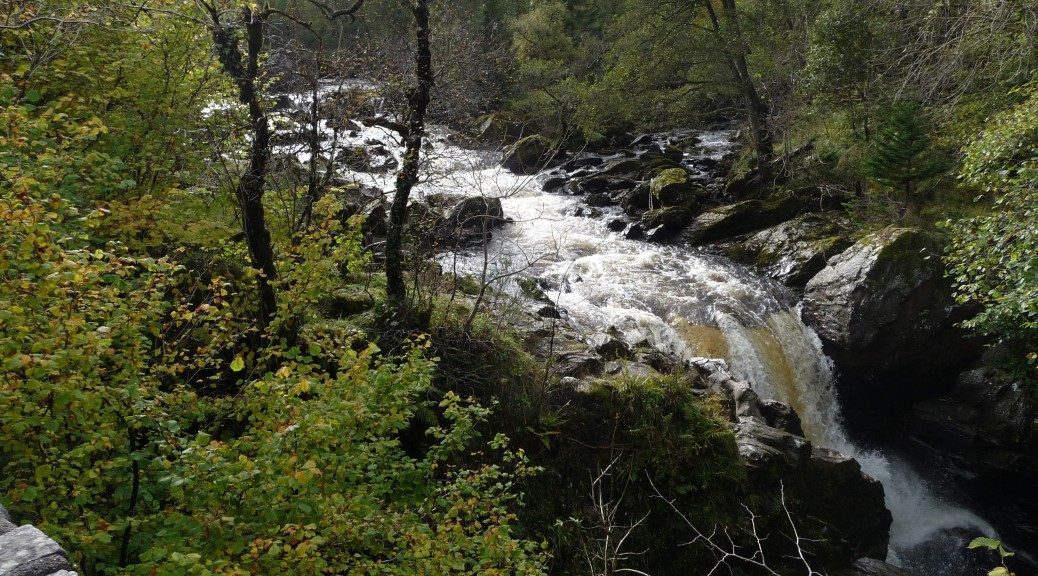 The Dunkeld countryside is stunningly beautiful, especially in October when the trees and vegetation are changing colours.  The paths twist and wind through deciduous woods of beech and birch, along three rivers, across open moorland and back through a wonderful gorge. On the way there are picturesque views of the Victorian station at Birnam and Dunkeld, Dunkeld cathedral, the Folly at the Hermitage and a lovely humorous introduction to Shakespeare’s oak ‘When Birnam Wood shall come to Dunsinane’. With good paths, sign-posts, stiles and gates and exceedingly photoesque opportunities this is a walk to repeat – maybe in every season!

To do it yourself

If you have a car there is ample parking in Birnam in which case take the path down the right-hand side of Birnam Hotel towards the River Tay. Alternatively, the train journey is part of a lovely day out and, with any kind of rail ticket (Senior, Student, Family etc), quite reasonably priced.

At the station, cross over the bridge to Platform 1. From the back of the ticket office you have the option of the picturesque route which runs from the north end (right-hand side facing the ticket office) of the station, down steps, turn left under the line, up beside the road (on an off-road track) to a signpost pointing towards the ‘Birnam Hill Path’ with red dots. Turn left to walk behind some huge houses. When sign-posted, go steeply down to the left and in the middle of a glade leave this track as directed to go back under the railway line to the cycle track.

Meanwhile, if you want to conserve energy, leave the station in the opposite direction, (left-hand, south) and pick up the cycle track which starts alongside the road and then goes slightly inland before emerging at the underpass where you will join the others. You will get there first!

You then have to cross the A9: there is a ‘chevroned’ lane in the middle where you could pause but basically you need to look for a gap in the traffic and run! This is the only time you cross this road.

You now join the Birnam Riverside Path (blue dots) which continues on the opposite side of the A9, down through the wood to Birnam, straight across the country road, down a metalled road which curves to the right, peters out into a track and then emerges at a seat on the River Tay. The next part is idyllic as the path, first narrow and winding alongside the river, broadens out into an extended woodland glade. You pass the famous Oak, continue under Dunkeld Bridge and on to a break in the vegetation which allows you to take photos of the cathedral on the opposite side.

At the junction of paths, turn right and leave the River Tay, taking the path alongside the River Braan, under the A9 this time, and immediately cross the River Braan to make your way beside a caravan park to Inver on, not surprisingly, the Inver Path (purple dots). Inver itself is rather attractive but the path less so. It emerges on the A9 again, but well behind a barrier on an off-road track. A very short distance lands you in the NTS site of The Hermitage with car park and information boards. Follow the River Braan on the Braan Path (green dots) through deciduous woods to ‘The Hermitage’. Although it looks as though the door is closed, it is always open and you can enter the Folly and go on to a little viewing platform to look at the waterfall.

Continue on the River Braan Path (green dots) past the Folly, beside the river, going westish! At a large black arrow pointing right, stop and turn round to see Ossian’s cave. Until the reccé I had always missed this! Then the path cuts away from the river a little, before exiting the NTS area by a gate, turning left on the road and walking downhill to finally emerge at the very famous ‘Rumbling Bridge’.

Cross the bridge and climb up the other side. A small sign points to the left to the continuation of the River Braan Walk (green dots). (If you miss, this a larger sign further on points to the same walk and the car park. Still on the River Braan Path, climb through woods, then unexpectedly cross a country road and continue on the other side. Go straight on, as signposted, on the Inchewan Path (orange dots). This climbs gently over open moorland in stark contrast to everything you’ve seen so far. Just before Balhomish farm turn sharp left, as directed, through a gate and across a field to enter woods. Turn right at this point and eventually pick up the Inchewan Burn which increasingly narrows into a ravine. Follow this path down to the station, but go straight on towards Birnam under the A9 emerging in front of the Hotel. If you have any energy left, wander through the Beatrix Potter Garden where you’ll see Peter Rabbit!