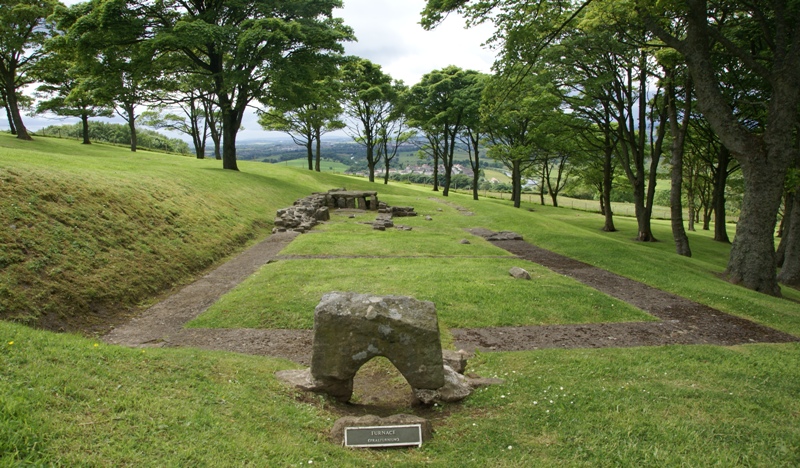 What used to be a cobbled together set of paths euphemistically linked by a few lies from Historic Scotland and which stopped dramatically at the wrong end of a cow in the foot n’ mouth crisis of 2001 has transmogrified itself into a perfectly respectable walk along the Antonine Wall worthy of it’s bigger brother further south. It includes some of Dullatur, Bar Hill Fort, Westerwood, Castlecary, Seabegs Wood, Croy Hill, the Antonine Wall and the Forth and Clyde Canal. Well I never!

Starting Point:
The meeting point is at OS Reference NS 720 768 which is the rear car park at the Boathouse Restaurant.

Getting there: 16 miles/30 minutes
Take your favourite route to the M80. Exit at Junction 4A, using the left hand lane to exit towards Kirkintilloch/Kilsyth /B8048. Keep left and follow signs for Kirkintilloch/Kilsyth /B8048/B802. At Back O’ Hill roundabout, take the 2nd exit onto B8048. At the next roundabout (Craiglinn) take the 3rd exit (continuing on B8048) and at the next roundabout (Blackwood) take the 3rd exit onto B802 (Howe Road) signed Croy/Kilsyth. Stay on this road for about 1.5 miles. At the next roundabout take the 3rd exit for Auchinstarry Marina. The Boathouse is on the left. Park behind the Boathouse; there is plenty of parking.
Please Note: (1) Toilets are only available in the Restaurant via purchase (e.g. Coffee £2.70)
(2) Depending on the weather some of the paths will be muddy so wear strong boots

The Walk: 7.0 miles (Shorter option available)
Take the path up behind the toilets and go through a gate onto the road. Turn right to cross the bridge and take the path down to the canal on the right. At the canal turn right to go under the bridge. Follow the canal path and at Twechar turn left over the canal and follow the road up hill. Just past the war memorial turn left (signed Barhill Fort/Antonine Wall /John Muir Way) where a track goes uphill. Keep right where it forks and turn left at the kissing gate (with John Muir Way sign). Pass through the next gate and head diagonally uphill to reach the remains of Bar Hill Roman Fort.

After exploring the fort continue ENE (from the top of the fort), to pick up a grassy path that soon climbs to the top of Castle Hill. This is the site of an iron-age fort. Continue on the grassy path, which curves slightly right, to join the edge of the ditch of the Antonine Wall which was built by the Romans as a northern replacement of Hadrian’s Wall. Passing an area of forestry on the right, continue until a stone wall (with a sign about the wall) and turn right. Shortly after turn left along a track. At a gate continue ahead and, likewise, at a later junction.

Anyone wanting a shorter walk can descend the footpath marked on the OS map to Auchinstarry.

At the B802, cross the road and go straight ahead. Turn right at a fenced enclosure, following a surfaced track for a short distance, then turn left after a gate signed Croy Hill. The track becomes a grassy path and ascends steadily to the summit of Croy Hill with great views of the surrounding land. The final steep climb can be by-passed on the left. Descend down the ridge, with the ditch still on the left, through a group of four large isolated trees, past a waymark for the John Muir trail and continue to a good path turning left towards to Castlecary. Ignore a good path on the right which goes steeply down to the canal and continue on the path as it curves round to the left and pick up the signs to Auchinstarry. The path arrives at the canal bank and hence to the Marina.