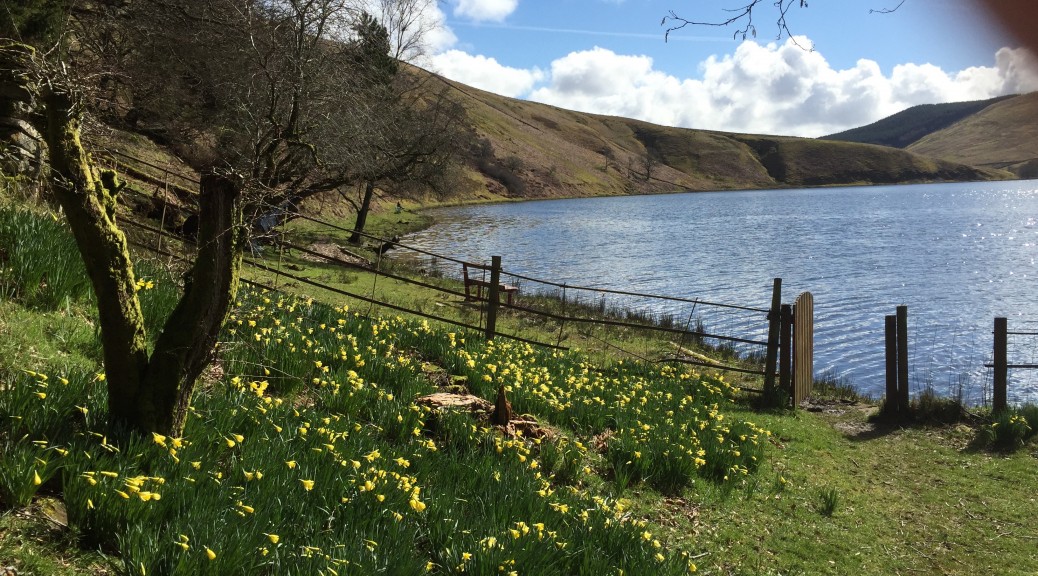 This walk begins another of Scotland’s long distance walks – ‘The River Ayr Way’ which starts at Glenbuck and ends in the town of Ayr. It is actually easier to do the whole walk since transport along the way is inconvenient to put it mildly. If you are doing sections along this linear route you either need two cars; or find an alternative route back; or do as we did walking a ‘lollipop’ with a long ‘stick’ and a very small ‘lollipop! I was assured by at least two people that if we all walked out, turned round  and all walked back  the same way no-one would notice and so it proved.

The walk turned out to be one of the easiest we’ve ever done.  Glenbuck Loch is lovely and surrounded by daffodils, the sadly-over-snowdrops, but with splashes of marsh marigolds and with spindly-legged lambs it was looking spectacular. Note that the beginning of April is lambing and not the best time of year to do this walk. We had the farmer’s permission but anyone doing this walk should perhaps plan to go later in the year. Please also read the ‘Notes’ about walking with sheep!

Park at Glenbuck Loch, which is just into East Ayrshire. Your satnav for ‘Glenbuck’ will take you there – otherwise follow these instructions. To get there, take the M8/A74 motorways south.  YOU MUST COME OFF the M74 ON THE B7078, JUNCTION 11, CLEARLY MARKED FOR HAPPENDON SERVICES. There is no exit south or north from the M74 on to the A70. Take the slip road down to the roundabout and continue straight on towards the Services. You may wish to use the toilets here as there are none at the car park. Take care on exiting as you have to cross a dual carriageway (the old A74) to continue south. At the large roundabout beyond the Services, turn right on to the A70 and go under the motorway towards Ayr. Continue across the next roundabout on the A70. It is now 6½ to Glenbuck, past Douglas and Glespin.

When you (eventually) come to a small loch and then a larger loch on your right and a huge brown ‘Welcome to Ayrshire’ sign with ‘Welcome to East Ayrshire’ in white underneath on your left, begin to slow down. There are a number of black and white chevrons as you go round a series of bends, then a low red brick wall on your left. Now look for a road on the right with a very small notice ‘Glenbuck Loch Fishing’. Turn right up this road.

(If you miss the turn right, continue on until it is safe to turn round and come back. This time the hamlet has a proper sign ‘Glenbuck’ sign and you turn in left.)

Drive up the road, turn right at the ‘Shankley Memorial’ and continue up to an idyllic car-park over-looking Glenbuck Loch. The smaller car park by the Information Board may be full, but if you turn left through the stone gate posts there is a larger car park up and right.

The walk starts in a beautiful spot  looking down on Glenbuck Loch where, in addition to the beauty of the scene, there are information boards about ‘The River Ayr Way’ and a ‘Sculpture’ path. It is well worth going down one of the several well-made paths to the loch-side partly to see the rather dubious ‘sculpture’ which marks the beginning of the Way; partly to look at the possibly more attractive Totem Pole of wild life, labelled ‘Muirkirk’; partly to go along the loch edge to the bird hide where the River Ayr way officially starts; but mostly just to admire the loch! If you take the path back up to the top car-park you will have completed a small interesting, and very beautiful  circuit. You might even have the good fortune to meet with the unofficial guides who will be delighted to tell you, and show you photos, of the history of the area.

Then follow the metalled road down the hill to the ‘Memorial to Bill Shankley’ which is worth reading even if you are not a Liverpool supporter!

Carry on taking the obvious road to the left and t the entrance to a farm  with a notice understandably saying ‘No Parking’ take the off-road path between a hedge and a fence which keeps you away from a dangerous bend on the A70. This comes down to the crossing of the A70 and a kissing gate with a River Ayr logo. The path goes off to the right and soon joins the route of the old railway.

The next 3½ miles simply take you through the valley on the disused railway line. The railway track bed makes for easy walking and enjoyment of the views towards the hills on the Ayrshire/Lanarkshire border, including Belt Knowe, Brack Hill, Little Cairn Table and Cairn Table. The route passes numerous ruins, for example the old Glenbuck Railway Station, and evidence of the industrial past of the area, with the huge opencast mine on the other side of the road a reminder that Ayrshire is still a major supplier of coal to Scotland and beyond. Where the path crosses tributaries of the young River Ayr there are sturdy bridges; and where the original railway bridges have been demolished, new paths down and back yp to the railway line have been created.

The route briefly leaves the railway line at Crossflat, heading right down the road for a short distance, then up the minor road towards Aldhouseburn before turning right through a fenced pathway. This route is now a filled-in canal and continues across open countryside before regaining the railway path just before Kames where you might stop for lunch.

On the way back you can take a slightly different route, just for a variety. This also uses an old railway line and takes you to and around Auldhousburn Farm before you regain the outward path. It is the ‘blue track’ on the Information Board at Kames, called the ‘Railway Walk’, To follow it retrace your steps, but where the River Ayr Way turns left, go straight on through a metal gate. This soon brings you to Auldhouseburn farm with large poultry sheds on your right. The path curves round to the left, by-passing the farmhouse itself, and brings you back to the River AyrWay and the route home.

The Loch was created 1802 by James Finlay for his Catrine Lace Mill and powered turbines there till 1967: the water also powered a dozen other water mills downstream. The dam’s creation largely drained the valley downstream and thus allowed the road to be relocated into the valley floor along the route of the modern A70 and paved the way for the adjacent railway line around 1839. Railway enthusiasts considered the Loch – dissected by the 1830 line – to be an exceptional place to photograph trains with still water either side of the line and many photos, well known to steam buffs exist. The last local train through Glenbuck station and over this dam was in 1964. The first steam railway in Scotland was between Troon & Kilmarnock had iron rails made in Glenbuck Iron works.

William “Bill” Shankly, OBE (2 September 1913 – 29 September 1981) was a Scottish footballer and manager who is best known for his time as manager of Liverpool. Shankly came from Glenbuck, one of five brothers who played football professionally. He played as a ball-winning right-half and was capped twelve times for Scotland, including seven wartime internationals. He spent one season at Carlisle United before spending the rest of his career at Preston North End, with whom he won the FA Cup in 1938. His playing career was interrupted by his service in the Royal Air Force during the Second World War. He became a manager after he retired from playing in 1949, returning to Carlisle United. He later managed Grimsby Town, Workington and Huddersfield Town before moving on to become Liverpool manager in December 1959.

Shankly took charge of Liverpool when they were in the Second Division and rebuilt the team into a major force in English and European football. He led Liverpool to the Second Division Championship to gain promotion to the top-flight First Division in 1962, before going on to win three First Division Championships, two FA Cups, four Charity Shields and one UEFA Cup. Shankly announced his surprise retirement from football a few weeks after Liverpool won the 1974 FA Cup Final, having managed the club for fifteen years, and was succeeded by his long-time assistant Bob Paisley. He led the Liverpool team out for the last time at Wembley for the 1974 FA Charity Shield. He died seven years later at the age of 68.

2 thoughts on “A trip to Anfield”