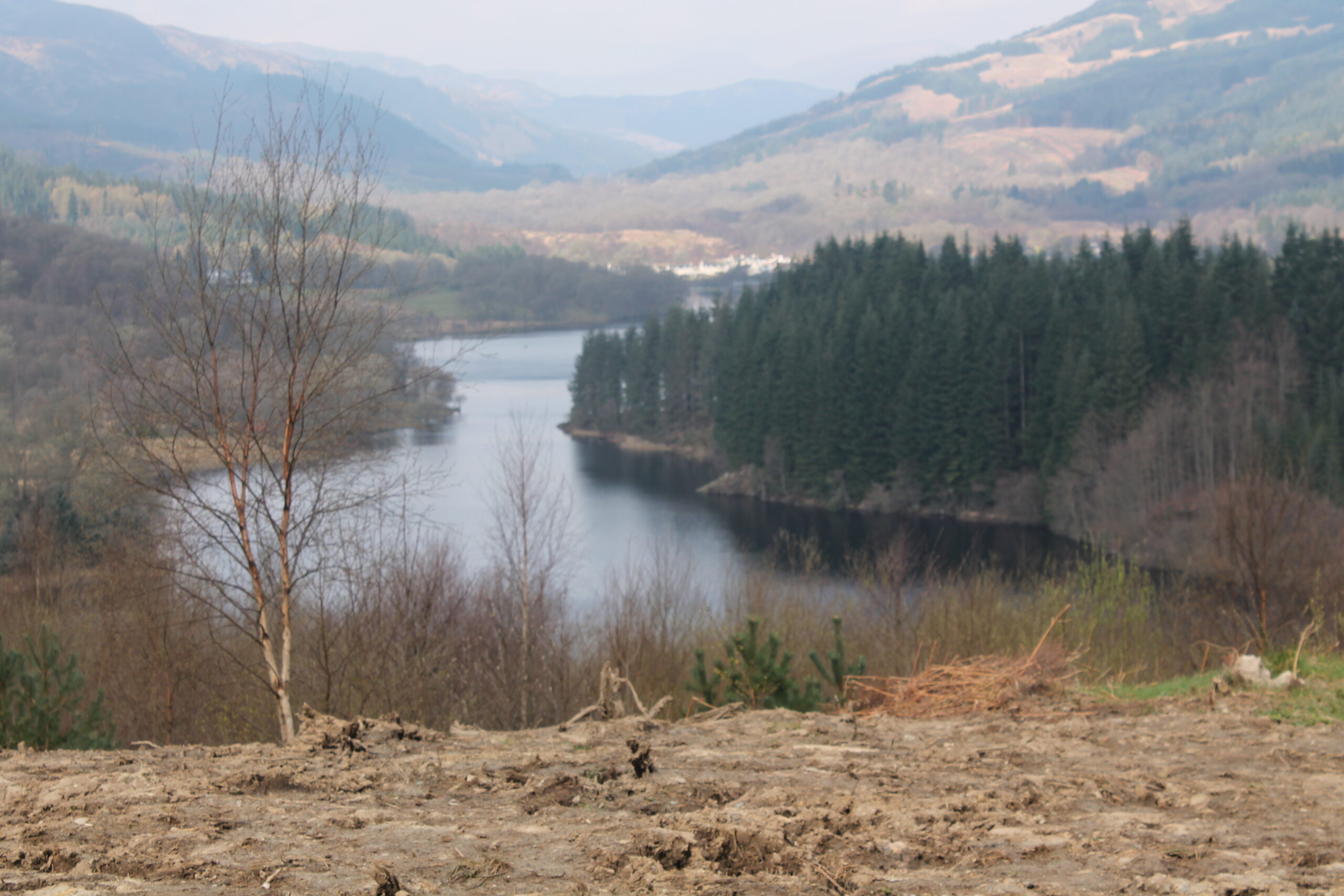 Starting Point for the Walk:At the Riverside Car Park in Aberfoyle (NN 521 009).  There are Public Toilets available nearby.

Getting there: 25 miles / 50 minutesTake your favourite route out of Glasgow and head towards Bearsden.  Then take the A809 towards Carbeth and continue onwards eventually turning right onto B834.  Turn left where the B834 meets the A81 and head towards Aberfoyle.  At Aberfoyle turn left at the roudabout onto A821 into the outskirts of the town.  Look out for the brown ’Trossachs Discovery Centre’ signs and turn left into the Riverside Car Park.  Parking is free.

The Walk:  8.2 miles (13 km)The walk starts from the Riverside Car Park in Aberfoyle.  Leave the Car Park via the west exit and then turn sharp left to cross the River Forth onto the Rob Roy Way, heading initially in a south westerly direction along a quiet rural road.  After 0.5 mile leave the Rob Roy Way and head in a south easterly direction along a forest road that skirts the southern edge of Doon Hill.  After a further 0.5 mile, the Forest Road splits into three separate routes. Take the right-turn option and continue for about 0.8 mile in a south westerly direction.  Then take another right-turn and a short series of meanders through the forest, heading broadly in a northerly direction.  In due course turn left to briefly re-join the Rob Roy Way.  [Distance so far = 2.3 miles]

After about 0.1 mile turn right, leaving the Rob Roy Way.  About 10 minutes later turn left, promptly followed by another left turn then a right turn – this is the start of a significant gentle climb along the northern slope of Garbeg Hill.  Soon after the forest road starts to descend Garbeg Hill, there is an extensive ‘open’ area of woodland which gives lovely views of the hills above Loch Ard.  Weather permitting, this would be a good place to have lunch.  [Distance so far = 4 miles]

Continue the gentle descent of Garbeg Hill.  After about 0.2 mile turn right onto the “Statute Labour Road” and continue along it for 1.2 miles.  Note: this was the starting point of the January 2012 walk!!  Then turn left and pick up the path that soon heads west along the north side of Lochan Spling.  Then it is a short climb along the west side of ‘Creag nam Fairenean’ before gradually descending via a series of meanders, across the Duchray Water, duly emerging at the Forest Car Park near the hamlet of Milton.  [Distance so far = 6.5 miles]

From Milton Car Park head to the hamlet of Milton.  The final section is along an (almost) level footpath along the B829 which returns to the Riverside Car Park in Aberfoyle. [Total Distance = 8.2 miles].